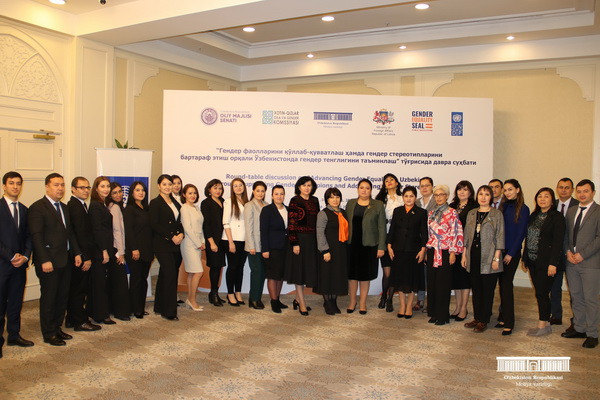 Tashkent, Uzbekistan (UzDaily.com) -- On 1 December, a round table on "Ensuring gender equality in Uzbekistan by supporting gender activists and overcoming gender stereotypes" was held at the International Hotel in Tashkent. It was organized in cooperation with the Republican Commission on Enhancing the Role of Women in Society, Gender Equality and the Family and the United Nations Development Program office in Uzbekistan.

The event was attended by representatives of the Committee on Women and Gender Equality of the Senate of the Oliy Majlis, the Ministry of Finance, the State Committee for Family and Women, the Delegation of the European Union and the Embassy of the Republic of Latvia in Uzbekistan, as well as ministries, departments and civil society.

The event opened with a video message from the Chairman of the Senate of the Oliy Majlis of the Republic of Uzbekistan Tanzila Narbayeva to the participants. In her address, Tanzila Narbayeva noted that a solid foundation has been created in the country to ensure gender equality. In order to ensure equal rights and opportunities for women and men in the social, economic and political spheres, the strategy for achieving gender equality in the Republic of Uzbekistan until 2030 was approved, the need for systematic continuation of work in the areas of effective organization and coordination of the activities of ministries and departments based on a unified approach to women and gender issues in order to achieve the goals set within the framework of strategies.

It was also noted that the Ministry of Finance of the Republic of Uzbekistan expressed interest in participating in the global program “sign of gender equality for state institutions”, which indicates high support for the work carried out in the field of women and gender equality issues in the Ministry.

Further, the head of the State Committee on Family and Women and Deputy Prime Minister Zuleikha Makhkamova noted that in order to further expand the participation of women in government and society in our society, a "program to increase the activity of women in public administration" was approved and as a result of its practical implementation, there is currently an increase in the proportion of women in leadership positions in political parties.

During the event, Ambassador Extraordinary and Plenipotentiary of the Republic of Latvia to the Republic of Uzbekistan Rainis Troksha and Permanent Representative of the United Nations Development Program in Uzbekistan Matilda Dimovskaya highly appreciated the sphere of gender equality in Uzbekistan, wished good luck in further planned reforms and stressed their direct cooperation in the implementation of initiatives in this direction.

After that, Deputy Finance Minister Gulnara Rakhimova focused on the work carried out today in the republic to ensure equal rights and opportunities for women and men in social, economic and political spheres, it was noted that the state has introduced a system of targeted assistance to citizens, focusing on the conditions and benefits created for them.

The event also featured a presentation of the results of the “nationwide study of gender stereotypes and patriarchal norms of preventing and overcoming violence and discrimination against women” conducted by the United Nations Development Program office in Uzbekistan. Suggestions and recommendations of the participants of the event on combating negative gender stereotypes were heard on the topic of the presentation.

At the end of the event, the participants exchanged views on new approaches, ideas and initiatives to achieve gender equality and expressed interest in contributing to the implementation of the National Strategy for Achieving Gender Equality in Uzbekistan.