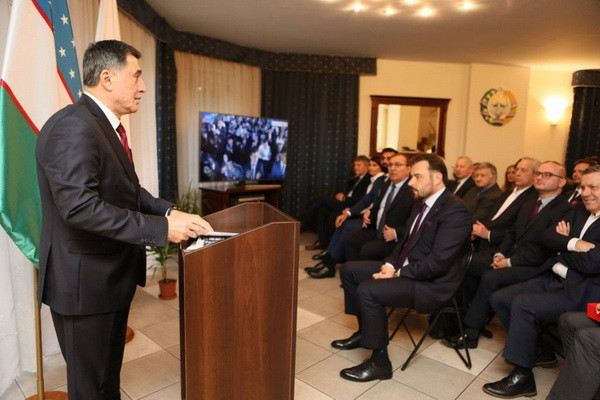 Warsaw hosts a meeting with representatives of official, expert, business and academic circles of Poland

Warsaw hosts a meeting with representatives of official, expert, business and academic circles of Poland

Tashkent, Uzbekistan (UzDaily.com) -- On 30 November 2022, a meeting was held at the Embassy of Uzbekistan in Warsaw with representatives of the Parliament, experts, business, academic and journalistic circles of Poland, as well as employees of Polish ministries and departments involved in development issues Uzbek-Polish relations (more than 50 people in total).

During the meeting, the participants were informed about the essence of the Development Strategy of the "New Uzbekistan", the constitutional reform, as well as large-scale reforms in all spheres of life, carried out under the leadership of the President of the Republic of Uzbekistan, as well as presented the main directions of the country’s economic development, potential areas for increasing trade and investment links between Uzbekistan and Poland.

President of the Chamber of Commerce and Industry "Poland - Asia" Janusz Piechochinsky (former Deputy Prime Minister and Minister of Economy of Poland) noted the dynamic nature of the development of bilateral relations in recent years.

“There are great opportunities for deepening cooperation in all areas, including the economy, agriculture, tourism and education.

Uzbekistan and Poland are the key states of Central Asia and Eastern Europe. They can play the role of a "bridge" between Europe, Central and South Asia.

Today Poland is the 6th economy in Europe, the 22nd in the world. Poland is watching with great interest the progress in Uzbekistan, the measures taken by the country’s leadership to strengthen security, sustainable development and establish cooperation with neighboring countries.

We are also seeing an increase in the number of citizens of Uzbekistan in Poland (about 20 thousand) in the field of labor migration (ranks 5-6 in the Polish market)," he stressed.

Honorary Consul of Uzbekistan in Poznan, rector of the Warsaw University of Management Pavel Czarnetsky highly appreciated the current level of bilateral cooperation in the field of education.

“Today Uzbekistan demonstrates great potential to the whole world. Our university is the first Polish university that opened its branch in Asia, namely in Andijan. We have been successfully working for the third year and see the interest of Uzbek youth in the European education system. We are honored that we have invested in human capital and education. The high percentage of youth literacy that Uzbekistan demonstrates is a guarantee of the success of the country’s tomorrow,” P.Charnetsky emphasized.

Chairman of the Board of the League of Polish Women Aldona Mikhalyak showed interest in the measures taken in Uzbekistan to ensure gender equality, protect the rights of women and children, and develop cultural and humanitarian ties between countries.

“I would especially like to note that the youth of Uzbekistan is actively involved in vital processes in the development of the country. Mostly young people with free and creative thinking are involved in senior positions of medium and high levels.

Our women’s organizations are actively cooperating, we are working together on gender projects in the field of culture and education. Public diplomacy is a strong bridge for mutually beneficial cooperation between our countries and peoples.”

Director of the Department of International Cooperation of the Polish Chamber of Commerce Jerzy Drozhd announced the need to implement the agreements reached during the 7th meeting of the Uzbek-Polish IGC on economic cooperation (on 14 April 2021). In particular, the chambers of commerce and industry of both countries are working on the issue of creating an Uzbek-Polish business council. According to him, such mechanisms are already operating with a number of strategically important countries for Poland, and they are producing great results.

He expressed the interest of the Polish side in preparing a solid package of investment agreements and export contracts for signing during the planned 8th meeting of the IGC on economic cooperation in May 2023.

In conclusion, a number of active representatives of the business and scientific circles of Poland, experts and journalists were awarded diplomas of the Ministry of Foreign Affairs of the Republic of Uzbekistan for their significant contribution to the development of Uzbek-Polish cooperation.