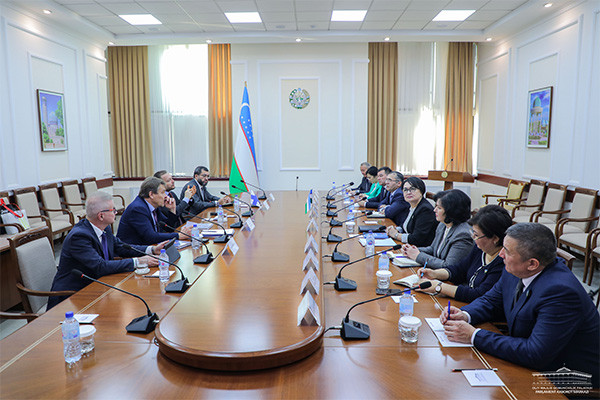 Tashkent, Uzbekistan (UzDaily.com) -- On 30 November 2022, First Deputy Speaker of the Legislative Chamber of the Oliy Majlis Akmal Saidov met with members of the delegation of the Finnish Parliament led by Chairman of the Finland-Central Asia Inter-Parliamentary Friendship Group Kimmo Kiljunen.

During the meeting, issues of developing cooperation between the parliaments of Uzbekistan and Finland were discussed.

Members of the delegation were given detailed information about the large-scale reforms implemented in recent years in all spheres of life, including in the foreign policy and economic activities of the Republic of Uzbekistan. They also spoke about the legislative activity of the parliament of our country, rule-making, methods of work of committees and factions, innovations in the field of parliamentarism.

In turn, Kiljunen expressed gratitude for the sincere meeting and highly appreciated the large-scale reforms being carried out under the leadership of President Shavkat Mirziyoyev, as a result of which the role of Uzbekistan is growing not only in the region, but also on the world stage.

During the meeting, an exchange of views took place on joint projects between Uzbekistan and Finland, including in the education system, as well as plans for the future.

During the meeting, which was held in a constructive spirit, the parties agreed to strengthen inter-parliamentary relations.

It was emphasized that inter-parliamentary relations are an important component of bilateral relations, and the consistent continuation and expansion of cooperation in this direction will serve to strengthen mutual relations.

As a result of the dialogue, the parties agreed on the implementation of appropriate measures through a mutual exchange of views on the development of not only inter-parliamentary, but also other areas and areas.