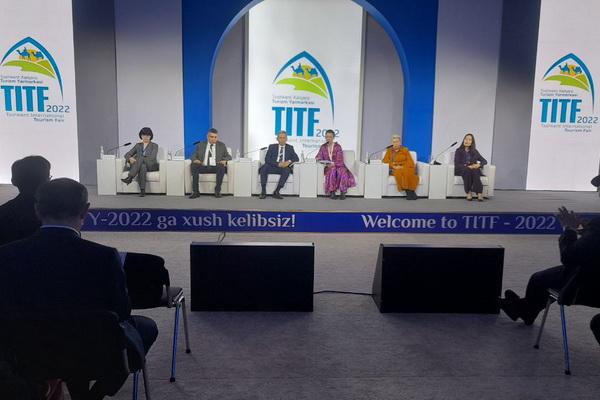 Tashkent, Uzbekistan (UzDaily.com) -- From 30 November to 2 December, the 27th Tashkent International Tourism Fair "Tourism on the Silk Road" (TITF 2022) is being held in Tashkent. The organizers of the fair were the Ministry of Tourism and Cultural Heritage of the Republic of Uzbekistan, the State Unitary Enterprise "National PR-Center", the exhibition company SAYS.

Opening the event, Deputy Prime Minister, Minister of Tourism and Cultural Heritage Aziz Abdukhakimov noted that today Uzbekistan is in the center of attention of the whole world. He said that the 25th session of the General Assembly of the UN World Tourism Organization UNWTO for the first time in the history of Uzbekistan will be held in Samarkand in the fall of 2023 and will attract more than a thousand foreign tourists from all over the world.

“Tashkent International Tourism Fair “Tourism on the Silk Road” - 2022 brought together more than 300 industry representatives from 30 countries of the world.

Within three days there will be forums and sessions with the participation of experts in the field, master classes, exhibitions, as well as for the first time in the history of the fair-fashion show with the participation of local and foreign designers. At the same time, B2B meetings will be held, which will be essential for the development of the tourism industry. In addition, visitors to the event will have the opportunity to get acquainted with the tourism potential of all regions of Uzbekistan in one pavilion,” said Aziz Abdukhakimov. TITF-2022 is an annual tourism event that has been held since 1995 with the support of the United Nations World Tourism Organization (UNWTO). Every year, the exhibition brings together hundreds of tourism industry professionals from all over the world and creates conditions for the development of this industry at the international level.”

Within the framework of the fair, an international exhibition will be held with the participation of tourism administrations from more than 15 countries such as: France, Japan, Malaysia, Thailand, Korea, Russia, Kazakhstan, Belarus, Azerbaijan and others with national stands. There will also be a forum and sessions with leading international and national experts, a gastro-bazaar with master classes by international chefs, an exhibition of artisans of Uzbekistan presenting the cultural heritage of the country, and, for the first time in the history of the fair, a fashion show will be held with international and national designers, not only clothes, but also jewelry.

This year, up to 20 thousand visitors from the local population, as well as from the CIS countries and Europe, are expected to attend the TITF-2022 site. Visitors and participants of the fair will have a unique chance to learn about new tourist destinations, plunge into the colorful atmosphere, culture and traditions of foreign countries. And also, it will be possible to assess the tourism potential of new locations in all regions of Uzbekistan.

Eminent specialists in the field of tourism have been invited to the TITF-2022 Forum. Among them: ambassadors of the tourism brand of Uzbekistan, representatives of BBC World News, Lonely Planet of the Association of Tourism Organizations of Central Asian countries and Russia, PR specialists and many others. At the same time, many B2B meetings between representatives of private companies from different countries are already planned for this year.

“Among the TITF participants will be representatives of such large companies as the consulting company Mangold Consulting GmbH, DVR, the German travel company TUI Group, the International Online Travel Agency Trip.com and the Russian Association of Tour Operators (ATOR). This return is unique in that this year, for the first time in history, we are holding this fair in the form of a public-private partnership without attracting budgetary funds,” said Dilfuza Samandarova, director of the National PR Center under the Ministry of Tourism and Cultural Heritage,

Uzbekistan is becoming an international platform for establishing contacts with the whole world and TITF-2022 is proof of this. It should be noted that this is due to the active support of tourism by the country’s leadership. Thus, on 19 September 2022, under the chairmanship of President Shavkat Mirziyoyev, a videoconference was held on measures to further increase the potential of domestic and inbound tourism. At this meeting, with the participation of relevant departments, the state of tourism in the regions was analyzed, huge opportunities were demonstrated and tasks were set for their use.

Uzbekistan Airways became the general partner of TITF-2022, Orient Finance Bank became the premium partner, Coca-Cola Ichimligi Uzbekiston, LTD was the gastronomic partner. The pavilion of the National Exhibition Complex "UzExpoCenter" has traditionally been chosen as the venue for the fair.

In 2022, the list of organizations providing partner support for TITF-2022 has expanded significantly. Along with local partners, the organizers of TITF-2022 managed to reach an agreement with the mayor’s office of the city of St. Petersburg, according to which the northern capital of Russia - the city of St. Petersburg acts as a partner city of the 27th Tashkent International Tourism Fair.