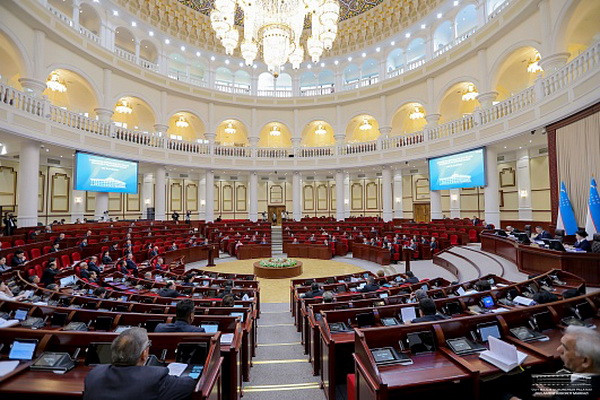 Tashkent, Uzbekistan (UzDaily.com) -- On 24 November 2022, a regular plenary session of the Legislative Chamber of the Oliy Majlis was held. During the meeting, the work carried out to improve the draft Constitutional Law “On Amendments and Additions to the Constitution of the Republic of Uzbekistan” following the results of the nationwide discussion of this document was discussed.

On the issue of the agenda, the Chairman of the Committee of the Lower House of Parliament on Combating Corruption and Judicial-Legal Issues J. Shirinov delivered information.

Changes and additions made to the Constitution over the past period serve as an important factor in improving the welfare of the population, the comprehensive development of the state and society, and the liberalization of all spheres of life.

The Development Strategy is the main important document for the next five years, which was developed jointly with our people and includes such goals as building a people’s state, ensuring more effective protection of the rights and interests, honor and dignity of a person, which necessitated the creation of a new constitutional and legal space corresponding to fundamental reforms in the country.

In particular, deputies, traveling to the regions, held meetings with citizens in state bodies, self-government bodies of citizens, enterprises, institutions and organizations, explained to the general public the essence and significance of the Constitutional reforms.

Despite the fact that the nationwide discussion of the bill was completed, citizens and the general public have received more than 2,500 proposals to date to improve and amend certain articles of the Constitution, to this day proposals continue to be received, which are comprehensively studied by deputies.

It was noted that the essence and significance of the draft Constitutional Law are aimed at consolidating as a constitutional norm the principles of "man - society - state" and "New Uzbekistan - a social state", the creation of a people’s state, strengthening the legal and social protection of a person.

Based on this, within the framework of the noble idea “Society is the initiator of reforms”, our Basic Law constitutionally fixes the role and status of civil society institutions, the constitutional foundations for the development of the family institution, the transfer of our noble values to future generations, and further strengthening of interethnic harmony.

In addition, today, when our children become the creators of New Uzbekistan, in order to ensure the rights and interests of young people, the state policy in the field of youth is fixed at the constitutional level, the issue of comprehensive support for our sons and daughters, their rights and obligations.

To improve the effectiveness of the current system of human rights protection, the draft Constitutional Law includes issues of preventing child labor, reliable protection of the rights of persons with disabilities, the elderly, and taking into account global climate change, special chapters on ecology.

It was noted that today the draft Constitutional Law is being discussed and finalized at joint meetings of the responsible committees of the lower house, as well as at meetings of factions of political parties.

Along with this, meetings of responsible committees are also held with the participation of specialists, experts, members of the public, and the media. In particular, meetings are organized with the authors of the most relevant proposals, who also take part in the discussions. And online work is being carried out with authors from remote areas.

On 6 October 2022, President Shavkat Mirziyoyev, at a meeting with the activists of Syrdarya region, emphasized the importance of fully reflecting the proposals received from the population in the development of the draft Constitutional Law.

Proceeding from this, the responsible committees of the Legislative Chamber are working hard to create a perfect, people’s Constitution that can guarantee the solution of citizens’ problems and reflect the proposals of compatriots in the norms of the Constitution.

At the meeting, the deputies, noting the work done by the Constitutional Commission and the responsible committees, stressed that the reasonable proposals of the people, requiring study and analysis, cannot be ignored or approached superficially, but on the contrary, it is necessary to continue work to improve the draft Constitutional Law.

It was noted that it is expedient to continue work on further improvement of the draft Constitutional Law in close connection with the main priority areas of the Development Strategy of New Uzbekistan, the constitutional and administrative reforms carried out in the country, including clarifying the powers of the highest bodies of state power and administration, to optimize the mechanisms of mutual cooperation.

Also, the responsible committees were tasked with developing constitutional norms to ensure further democratization and openness of the civil service, optimization and modernization of public authorities in accordance with the ongoing administrative reforms in the country, strengthening constitutional guarantees of human rights and freedoms, improving the mechanisms of public, parliamentary and deputy control, strengthening the constitutional mechanisms for implementing the principle of a social state, in which the honor and dignity of a person are placed in the first place and other important issues.

It was also noted that it is necessary to study advanced foreign experience, take measures to develop proposals for introducing the best experience in creating effective constitutional foundations for the state and society, considering topical issues of constitutional reform, organizing a number of events both in our country and abroad with the involvement of domestic and foreign experts to explain the main tasks, essence and significance of constitutional innovations.

As a result of the meeting, a corresponding resolution was adopted on the continuation of work to improve the draft Constitutional Law, as well as tasks for the responsible committees were determined.