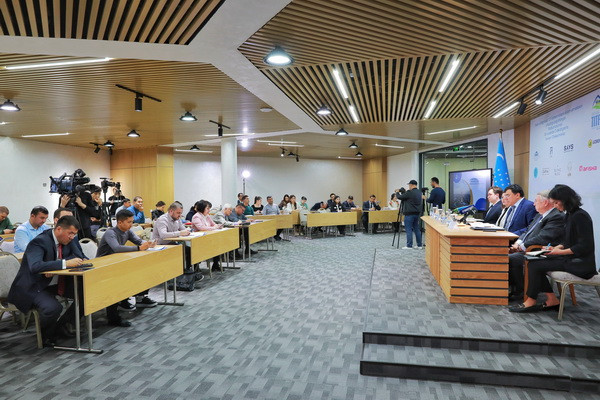 Tashkent, Uzbekistan (UzDaily.com) -- From 30 November to 2 December, the Tashkent Uzexpocentre will host the 27th Tashkent International Tourism Fair “Tourism on the Silk Road”. Today, on 23 November, a press conference was held at the Ministry of Tourism and Cultural Heritage before the fair. The organizers of the fair are the Ministry of Tourism and Cultural Heritage of the Republic of Uzbekistan and the National PR Center.

“Uzbekistan is becoming an international platform for establishing contacts with the whole world, and the Tashkent International Tourism Fair is a vivid confirmation of this. These processes, of course, are connected with the fact that tourism is actively supported by our government, Aziz Abdukhakimov said. “The Tashkent International Tourism Fair, in turn, will become the most striking international event in the field of tourism in Uzbekistan and throughout Central Asia, uniting common efforts to support the tourism industry in the region and expand the geography of international cooperation in the field of tourism.”

Klaus Mangold, who is currently in Uzbekistan, highly appreciated the tourism potential of our country and the ongoing reforms in the field. Answering a question from journalists, he noted that events such as TXTY are important for the development of the tourism sector and wished the organizers success in this regard.

In addition, the professor donated a number of books related to this area to the Ministry of Tourism and Cultural Heritage.

Speaking at the event, Dilfuza Samandarova noted that this time the number of participants has increased significantly.

“The main goal of the tourism fair is to promote the tourism potential of all regions of Uzbekistan and develop international cooperation. More than 70 organizations from 15 countries with their national stands will take part in the fair, speakers, consultants, participants and guests from more than 20 countries will speak. To date, 12 thousand visitors have already been registered, but the number is growing every day. Participants from Malaysia, Thailand, Korea, Russia, Kazakhstan, Belarus, Azerbaijan and other countries are expected to take part in the fair. It is worth noting that there are new participants among them, such as France and Japan,” said Dilfuza Samandarova.

It is expected that this year up to 20 thousand guests from among local residents, as well as from the CIS countries and Europe, will take part at the TITF-2022 site.

Visitors and participants of the fair will have a unique chance to learn about new tourist destinations, plunge into the colorful atmosphere, culture and traditions of foreign countries. And also, it will be possible to assess the tourism potential of new locations in all regions of Uzbekistan.

Eminent specialists in the field of tourism have been invited to the TITF-2022 Forum. Among them are ambassadors of the tourism brand of Uzbekistan, representatives of BBC World News, Lonely Planet, Associations of Tourism Organizations of Central Asian countries and Russia, PR specialists and many others. At the same time, many B2B meetings between representatives of private companies from different countries are already planned for this year.

It is worth noting that in 2022 the list of organizations supporting cooperation with TITF has expanded significantly. Along with local partners, the northern capital of Russia, the city of St. Petersburg, will take part as a partner of the 27th Tashkent International Tourism Fair.

For your information, the Tashkent International Tourism Fair was first held in 1995 with the support of the United Nations World Tourism Organization (UNWTO).