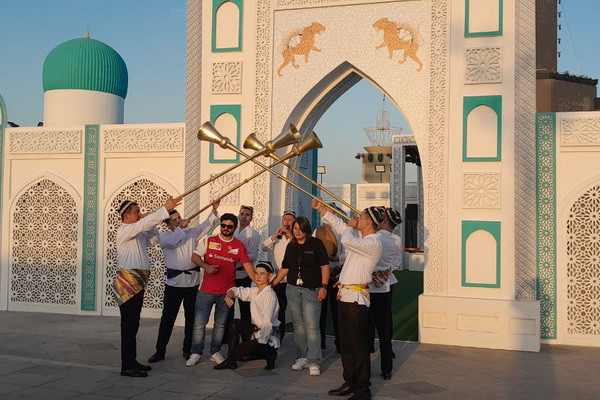 Tashkent, Uzbekistan (UzDaily.com) -- On 18 November, in Abu Dhabi, in the Al Watba district, with the support of the Ministry of Tourism and Cultural Heritage, the opening of the Uzbekistan pavilion took place as part of the Shayx Zoid festival. The stand is dedicated to the 31st anniversary of the adoption of the State Flag of the Republic of Uzbekistan.

The traditional cultural heritage festival "Shayx Zoid" is being held for the fourth time and will last until 18 March 2023. Under the slogan "Welcome!" hosts drone and laser light shows, as well as Emirates fountain shows, archery, military heritage music, heritage competitions and fun sporting events.

More than 20 country pavilions take part in the festival, where the Art City, the Selfie street zone, the Desert Museum, children’s playgrounds, a flower town and food pavilions are presented.

The organizers of the pavilion "Uzbekistan" are traditionally the Ministry of Tourism and Cultural Heritage and the Export Promotion Agency under the Ministry of Investments and Foreign Trade. In cooperation with the Emirati side, musical groups, artisans and chefs were involved to promote the potential of Uzbekistan.

During the festival, diplomatic representatives of Uzbekistan in the UAE congratulated compatriots on the 31st anniversary of the adoption of the state flag of the Republic of Uzbekistan. Uzbek national melodies were played at the event, folk dance performances were organized, master classes of artisans were held, and a video dedicated to the state flag and tourism potential of Uzbekistan was shown on the screens of the central square of the city. A festive table was organized in the pavilion of Uzbekistan in honor of the State Flag Day for the participants and guests of the event.

At the end of the event, a group consisting of compatriots in the UAE, artists and a team of bloggers marched in a parade with the flag of Uzbekistan.