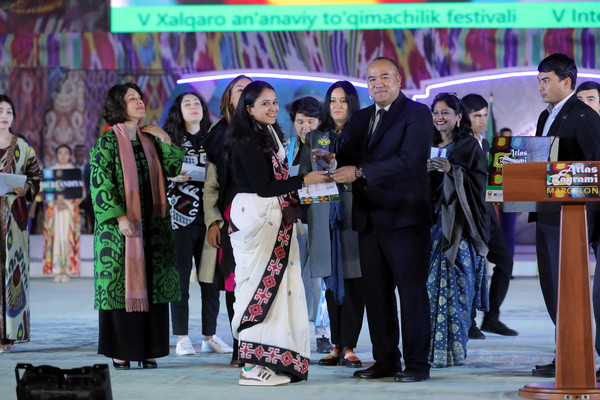 Tashkent, Uzbekistan (UzDaily.com) -- On 22 October, the closing ceremony of the 5th Atlas bayrami International Festival of Traditional Textiles took place in the park of artists in the city of Margilan.

The ceremony was attended by Deputy Minister of Tourism and Cultural Heritage Nusratilla Zikrillaev, Head of the UNESCO Office in Uzbekistan Sara Noshadi, Deputy Khokim of the Ferghana Region Khurshid Akhmedov, Khokim of the city of Margilan Adkham Zievuddinov, Academician of the Academy of Sciences Akbar Khakimov.

Also, the head of the UNESCO office in Uzbekistan, Sarah Noshadi, spoke about the significance of the festival and expressed her gratitude to the organizers. It was noted that this festival served to further develop and popularize national crafts and tourism, strengthen interstate relations, and expand cooperation between artisans.

The festival was attended by leaders of the traditional textile and design industry, artisans, art critics, art managers, specialists in the field of traditional crafts management from 21 countries.

At the end of the first day of the festival, the Margilan Handicraft Development Center hosted a fashion show of a collection of clothes by famous designers from Uzbekistan, Kazakhstan, Kyrgyzstan, Russia and Tajikistan. The designers provided their ideas using Uzbek elements to increase the popularity of Uzbek textile products in the international arena. On the second day, a defile was held at the Yodgorlik factory, where designers from Europe and the Pacific region presented their collections.

One of the important events of the festival was an international conference on the topic "The role of traditional textiles in the modern world." The event included lectures, presentations on modern artistic textiles, as well as folk textile crafts from Tajikistan, India, Malaysia, Bangladesh, Turkey, Mongolia, Bulgaria, Italy, Russia and other countries.

During the festival, along with other events, within the framework of the national project "Yashil Makon", responsible leaders, foreign guests from Italy, the USA, Kyrgyzstan, Kazakhstan, Iran, Mongolia, Tajikistan, India, Canada and many other countries, craftsmen and entrepreneurs, in the park of artists, seedlings of various ornamental trees were planted to create the "Garden of Friendship".

In addition to the round table on the topic “Achievements and obstacles in the production and export of Ikat products”, the guests were also impressed by the traditional textile exhibition “Heirs of the Great Silk Road”, which was held at the Museum of the History of Margilan. The participants got acquainted with the expositions dedicated to the history and types of satin fabrics created in Uzbekistan and in more than ten foreign countries.

According to the results of the international exhibition on traditional textiles and fashion show, the winners of these nominations were determined and awarded:

Nominations in the field of traditional textiles

Nominations in the fashion industry:

For the original interpretation of ethno-cultural traditions - Aijan Bekkulova (Kazakhstan)

For a mix of retro and ethnic style - Irina Sharipova (Uzbekistan)

For the aesthetics of glamor and a sense of high fashion style - Zuhra Inat, Moel Bosh (Latvia)

For the contribution to the preservation and development of traditional textiles and many years of activity in organizing the Atlas Bayrami Festival - Rasul Mirzaakhmedov (Uzbekistan).