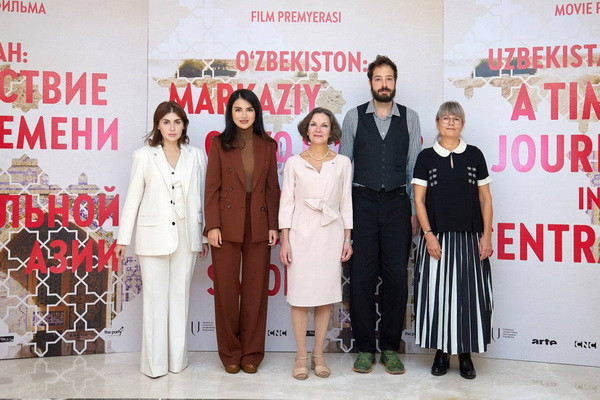 Aurelia Bouchez: "The French people dream of seeing Uzbekistan with their own eyes"

Aurelia Bouchez: "The French people dream of seeing Uzbekistan with their own eyes"

Figures of science and culture, representatives of the diplomatic corps and international organizations were invited to its show.

Aurelia Bouchez, Ambassador Extraordinary and Plenipotentiary of the French Republic to Uzbekistan, expressed her opinion about the film.

— I am pleased to be among the guests of the film premiere, especially considering the fact that this is largely an Uzbek-French project. Thanks to this film, viewers will already get a first impression of the scale of the forthcoming exhibition at the Louvre, which will open in November this year.

I want to thank everyone who worked on the film and express special gratitude to the Art and Culture Development Foundation, represented by the Deputy Chairman of the Council of the Foundation, Ms. Saida Mirziyoyeva and its Executive Director, Ms. Gayane Umerova, as well as the administration of the Louvre Museum and the ARTE TV channel for their productive cooperation in the name of common goals.

It should be noted that this show, and the work that preceded it, and the exhibition itself in Paris are a wonderful illustration of the established fruitful cultural ties between Uzbekistan and France.

The film and exhibition will help the French public to become more familiar with the rich cultural heritage of your country. So far, most French people know about Uzbekistan only that it is the most populous state in Central Asia, which is developing very quickly and has political prestige in the region, and that the famous cities of Samarkand and Bukhara are located there. The people of France have really heard about them and dream of seeing with their own eyes the places where caravan routes passed in ancient times, with which rich culture and history are associated. This is precisely the reason for the increasing flow of tourists from my country to Uzbekistan from year to year. Already now, 20,000 people come to you a year. And I can say with confidence that in the near future, thanks to the exhibition at the Louvre Museum, this figure will be much higher, because it is visited by 10 million a year, and these are not only residents of France and neighboring countries, these are art connoisseurs from all over the world!

The exhibition we are talking about will be truly unique. Many of its exhibits will be presented to the public for the first time, as they were found relatively recently during archaeological excavations. It should be emphasized that French archaeologists are working very dynamically on Uzbek territory. Especially Mr. Rocco Rante, the famous archaeologist who is also the curator of the exhibition.

I am very glad that the Art and Culture Development Foundation contributes to the preservation of the cultural heritage of Uzbekistan and relies on the French experience in this.