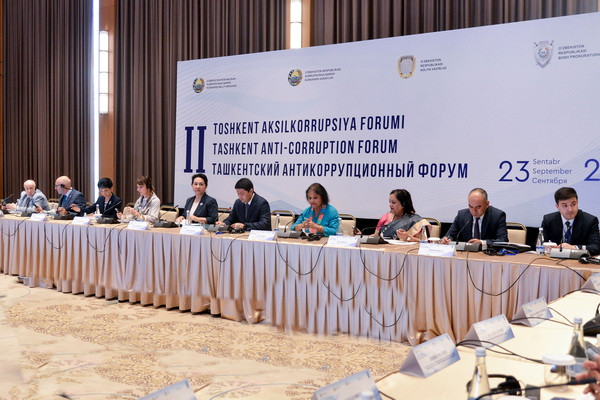 The use of artificial intelligence in detecting and combating corruption: a review of international experience

The use of artificial intelligence in detecting and combating corruption: a review of international experience

Tashkent, Uzbekistan (UzDaily.com) -- On 23 September, the National Anti-Corruption Council, together with the Anti-Corruption Agency, the Ministry of Justice, the Prosecutor General’s Office and the United Nations Development Program, held the II Tashkent Anti-Corruption Forum.

It was attended by representatives of anti-corruption authorities from the United States, Korea, Hong Kong, Malaysia, Latvia, Azerbaijan, as well as foreign experts, representatives of the diplomatic corps and international organizations, ministries and departments, civil society institutions, and the media.

Opening the forum, Chairwoman of the Senate of the Oliy Majlis Tanzila Narbayeva emphasized the importance of the event and the work carried out in Uzbekistan to combat corruption and the role of the parliament in this work.

- The practice of annual hearings in the Senate of the National report on combating corruption in the Republic of Uzbekistan of the Anti-Corruption Agency has been introduced. In the fight against this defect in management from the top to the lowest level, a completely new system has been formed, aimed at establishing parliamentary and deputy control. In particular, in order to increase the effectiveness of parliamentary control in the field of combating corruption, the National Anti-Corruption Council was established under the leadership of the Parliament, special committees were established in both chambers of Parliament, and the activities of territorial councils under the leadership of local Kengashes of people’s deputies were established in the field, - said Tanzila Narbayeva .

It is worth noting that this forum, which is traditionally held every year, envisages summing up the results of the activities carried out and the measures taken in the field of combating corruption in Uzbekistan and in the countries of the world, as well as discussing future priority new projects and exchanging experience.

The Chairman of the Senate dwelled on the areas that will be given attention in the fight against corruption in the country in the next five years. According to her, each legal act is developed on the principle of "legislation free from corruption", systemic preventive measures in the practice of combating corruption will be strengthened. In addition, modern information technologies, including artificial intelligence technologies, will be introduced into the anti-corruption work, and public control will be supported by establishing interaction with civil society institutions.

The forum has become a platform for the exchange of views of national and foreign experts, representatives of government agencies, civil society institutions and the media in the field of combating corruption.