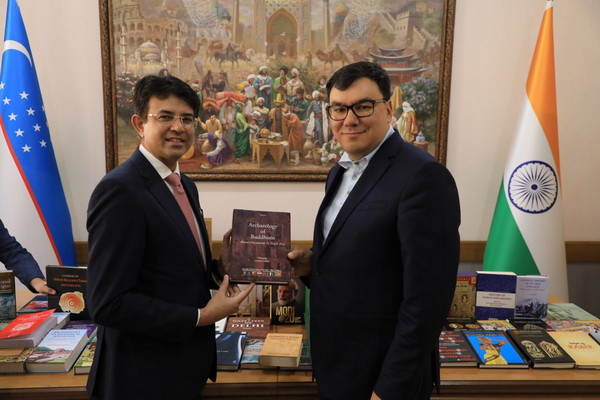 Tashkent, Uzbekistan (UzDaily.com) -- As part of the SCO summit, an Indian delegation visited the Silk Road International University of Tourism and Cultural Heritage.

During the visit, the delegation got acquainted with the activities of the university, and also handed over from the Prime Minister of India more than 200 books about India, covering various aspects of the country, such as politics, economics, tourism, culture, history, architecture and other areas, to the university library.

It should be noted that this transfer of books serves as a vivid example of the development of cultural diplomacy, and also makes a huge contribution to strengthening Uzbek-Indian relations in the field of education and tourism.

At the moment, the university library has a unique collection of books for the preservation of cultural heritage.

Under the leadership of the Deputy Prime Minister of Uzbekistan, Minister of Tourism and Cultural Heritage, Rector of the Silk Road University Aziz Abdukhakimov, in the shortest possible time, about 20 thousand books were delivered to the library in such areas as tourism, art, history, archeology, ethnology, geopolitics, economics, cultural studies, religious studies, painting, sculpture, architecture, cultural heritage published in all corners of the world. Also, the university library has more than 100 thousand books in electronic format.

The Silk Road International University was opened at the initiative of the President of Uzbekistan Shavkat Mirziyoyev at the G8 Summit, held in Qingdao, at a meeting of the heads of state of the Shanghai Cooperation Organization. By decree of the President of the Republic of Uzbekistan No. 3815 dated June 28, 2018, the first state university with international status was organized.