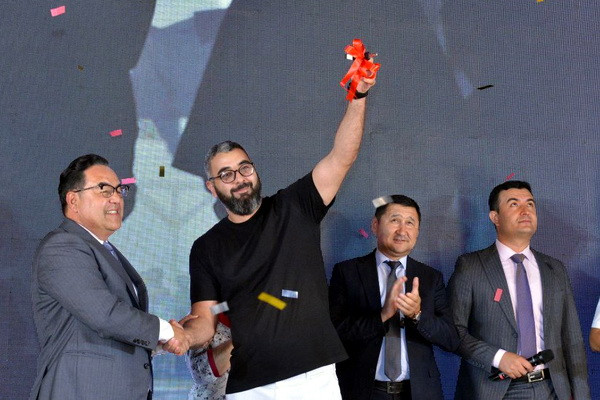 Tashkent, Uzbekistan (UzDaily.com) -- On 9 September, a solemn ceremony of awarding the creators of documentaries as part of the "Heart of the People" cycle took place on the Alley of Writers.

As you know, on 20 May 2020, President of the Republic of Uzbekistan Shavkat Mirziyoyev, during the grand opening of the Alley of Writers, instructed the Cinema Agency, together with the capital’s universities, to create a series of documentaries about great poets and writers, whose monuments are installed on the Alley.

In 2020, the first film about the Alley of Writers, “The Heart of the People”, was created and presented, and it was followed by a whole cycle of 24 documentaries dedicated to writers, which are immortalized on the Alley of Writers. Among these documentary films, the competent jury selected the most worthy film. This is a film directed by Khusan Rashidov “Cholpon. Memoirs of Birds.

And today the solemn awarding ceremony and presentation of prizes took place. The winner, who was selected by an authoritative jury consisting of well-known filmmakers, writers, cultural figures, became the owner of the main prize - a Chevrolet Cobalt car.

"Cholpon. Memoirs of Birds” is my film for which I received a prize. Of course, we hoped for success, because the team that worked on the film did a great job. About 300 people worked on the documentary. Thank you so much! It was so unexpected, and it was precisely the fact that we did not even suspect about the victory that gave it such sharpness, shock and incredible emotions. Every work has its own reward, and today I was convinced of this. I am very grateful to our esteemed President for the opportunities that are provided to young filmmakers, documentary filmmakers, for such huge incentives. I wanted to thank everyone who was involved in our common victory - my team, parents, teachers. There has never been such a powerful creative motivation and such large prizes in the history of our cinematography,” said the winner of the contest, production director Khusan Rashidov.

The leaders of the capital’s universities were presented with gift albums with flash drives of all 24 films of the "Heart of the People" cycle, and documentary filmmakers were awarded with tablets.

“Documentary cinematography in New Uzbekistan is on the rise. We are very happy to see the support from the President of Uzbekistan Shavkat Mirziyoyev and the government of the country, attention to the development of not only feature films, but also documentary films.

For the first time in the history of cinematography of Uzbekistan, a competition for documentary filmmakers was held. It is important because we stimulated documentary filmmakers who selflessly worked on the creation of 24 films during the pandemic. The main prize - a Chevrolet Cobalt car - is the strongest motivation for young filmmakers,” said Firdavs Abdukhalikov, Director General of the Cinematography Agency of Uzbekistan.

“In New Uzbekistan, increased attention is paid to the field of cinematography, and issues of spirituality of youth, preserving the memory of great ancestors. We are sincerely glad today to congratulate the winner of the competition and wish him further creative success. Taking into account that we are awarding a valuable prize, in order to avoid various misunderstandings, the minutes of the meeting and the sealed envelopes with the results of voting by the jury members were opened in a special room and announced in front of the cameras in the presence of neutral witnesses in order to ensure the transparency and objectivity of the competition,” said Director of the State Unitary Enterprise “Film Studio of Documentary and Newsreel Films” Furkat Usmanov.