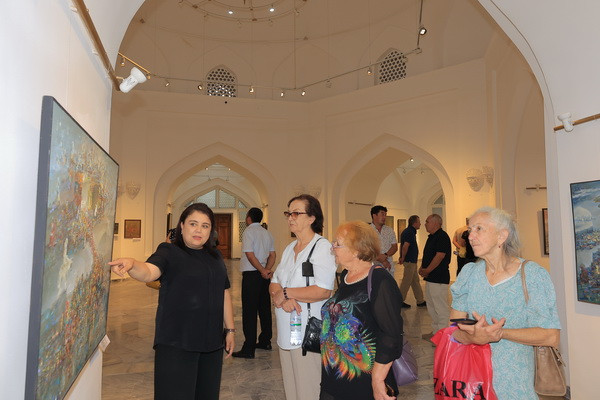 Tashkent, Uzbekistan (UzDaily.com) -- On 7 September 2022, the ChorSu Gallery in Samarkand hosted the opening of a personal exhibition of Academician of the Academy of Arts of Uzbekistan Asliddin Isaev entitled "The Spirit of Samarkand through the Eyes of an Artist".

“Over the past 5 years, a lot of work has been done in the field of tourism and cultural heritage, targeted reforms have been carried out thanks to the attention paid by the leadership of our state. We will not be mistaken if we say that a number of events taking place in Samarkand on the eve of the summit of the Shanghai Cooperation Organization are a consequence of this. It is known that in recent months the city of Samarkand has been visited by artists, sculptors, racing drivers, photographers and blogger influencers from the SCO member countries. Each of them tried to reflect the spirit of Samarkand through their works. Today’s exhibition "The Spirit of Samarkand through the Eyes of an Artist" is a logical continuation of these works," the speech says.

The exposition exhibits 65 creative works of the artist. In the works of the artist you can see the childish purity, innocence and elegance. His paintings “Flapjacks baked for the wedding”, “Cab driver”, “Wedding”, “Unexpected light”, “Evening on the collective farm”, “Autumn. Melon Market" reflect the national values and traditions of the Uzbek people.

Asliddin Isaev was awarded the Order of Friendship. In 2018 he was awarded the title of Academician of the Academy of Arts of the Republic of Uzbekistan. He is one of those artists who found his own style and image. His works depict people close to him since childhood, the beauty of ancient and eternally young Uzbekistan, its history. The native city of Samarkand, its beautiful landscapes serve as a source of inspiration for the artist throughout his creative life.

On the eve of the SCO summit, Samarkand was visited by experienced artists from the SCO member countries. Their best works, reflecting the spirit of Samarkand, will be presented at the international exhibition, which will open on the eve of the summit.