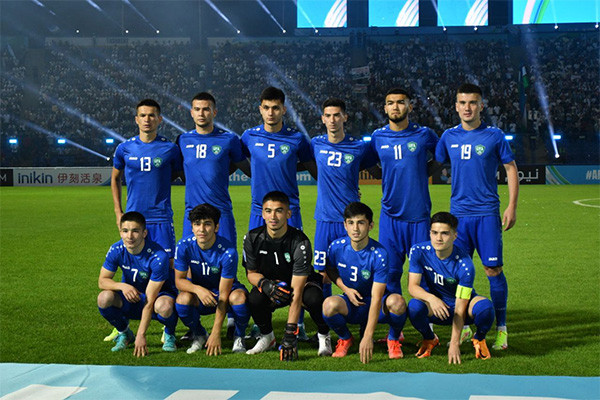 Tashkent, Uzbekistan (UzDaily.com) -- Uzbekistan needed a late penalty to defeat Turkmenistan 1-0 in Group A of the AFC U23 Asian Cup™ Uzbekistan 2022 at the Pakhtakor Stadium on Wednesday.

After a goalless first half, substitute Ulugbek Khoshimov gave Uzbekistan the vital three points after converting from the penalty spot in the 73rd minute.

Uzbekistan started brightly and almost punished Turkmenistan inside the first minute when Khojimat Erkinov floated a dangerous cross into the area but goalkeeper Rasul Charyyev was quick to deflect the ball to safety.

Turkmenistan, making their first appearance in the AFC U23 Asian Cup, found themselves under incessant pressure as Uzbekistan attacked in numbers with Otabek Jooraqoziev almost finding a way through off a Husain Norchaev through ball, only to be flagged offside.

The debutants finally settled into the game and almost caught Uzbekistan by surprise in the 10th minute after Velmyrat Ballakov set up Samammet Hydyrow nicely at the top of the box but the midfielder sent his shot above the bar.

Despite controlling the game, Timur Kapadze’s side couldn’t convert their chances with Jasurbek Jaloliddinov firing his long-range effort wide in the 12th minute, while Diyor Kholmato saw his attempt from inside the box blocked 10 minutes later.

Uzbekistan then saw two big chances go to waste, the first in the 24th minute when Jaloliddinov’s goal-bound effort was saved by Charyyev, who was called into action again four minutes later, this time saving Abdurauf Boriyev’s shot off a corner.

The hosts continued being wasteful in front of goal with Husain Norchaev and Diyor Kholmatov both missing the target, meaning the score remained 0-0 going into the break.

Uzbekistan, the 2018 champions, turned up the tempo in the second half with Kholmatov almost producing a moment of brilliance in the 54th minute when he evaded his marker at the top of the box before sending a curling effort, forcing Charyyev into a diving save.

Charyyev again rescued Turkmenistan two minutes later when he kept out Muhammadqodir Khamraliev’s header from inside the area.

Uzbekistan were thrown a lifeline in the 73rd minute when they were awarded a penalty after Wepa Jumayew’s handball with substitute Khoshimov coolly slotting home past a diving Charyyev, to the delight of the home fans.

Turkmenistan were denied an equaliser at the very end when Yhlas Toyjanov forced a fingertip save from Uzbekistan goalkeeper Abduvohid Nematov, meaning they will have to bounce back against Islamic Republic of Iran on Matchday Two.

Uzbekistan, meanwhile, will aim for their second win when they face Qatar, who played to a 1-1 draw with Iran earlier on Wednesday.