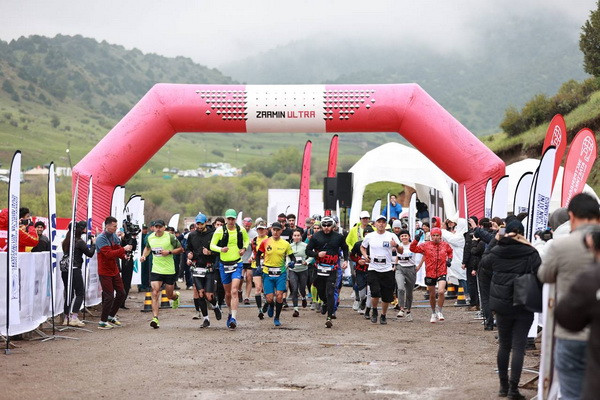 Tashkent, Uzbekistan (UzDaily.com) -- ZAAMIN ULTRA is an international mountain ultramarathon organized by the Culture and Art Development Foundation jointly with the Ministry for Sports Development and the Jizzakh region khokimiyat.

ZAAMIN ULTRA was held on 28-29 May on the territory of the Zaamin National Natural Park (Jizzakh region). This is a unique mountain race, which takes place at an altitude of 2500 meters above sea level. As part of this event, an electronic music concert was held on 28 May. On 29 May, the ultramarathon itself took place, during which the participants had the opportunity to admire the snow-capped mountains of the Turkestan Range.

ZAAMIN ULTRA is the first ultramarathon in the history of the country, which is held annually. The race track is located at an altitude of 2,200 - 2,500 meters above sea level, and this is the height of 6 Tashkent TV towers. The race track is looped. The length of the circle is 25 km.

Saida Mirziyoyeva, Deputy Chairman of the Board of the Culture and Art Development Foundation, noted:

“The ultramarathon is part of the Samarkand Marathon series of charity races, which, in turn, is in the top 100 best races in the world! The goal of the 2022 races is to adapt museums to the needs of people with visual impairments. The cross-country track in Zaamin is distinguished by its incredible picturesque view and the richness of nature. It passes along a road that has been inaccessible for a long time. This is a unique opportunity to test yourself!”

“Since 2019, the Foundation has been holding the Samarkand Charity Marathon, which brings together thousands of participants from all over the world. Every year, all participants of the marathon are united by charitable goals. We hope that the series of races in Zaamin, and further in Bukhara, and in the Bostanlyk region will support the goal of the Samarkand Marathon 2022 and help to attract additional attention and resources to this topic.”

Mirkhan Sagitov, Head of the Department of Special Projects of the Fund for the Development of Culture and Art of the Republic of Uzbekistan, curator of the Samarakand Marathon project:

This year, our series of events has expanded to four major races: in Zaamin, Bukhara, Samarkand and the Bostanlyk district of the Tashkent region, and we have added a new unusual event. It will be held in Bukhara in a completely new format for us and for the country. In November, the marathon in Samarkand will traditionally culminate in a series of races. The new marathon distance (42 km), we believe, will become a new center of attraction for foreign participants from all over the world, in addition, our race has become a qualifying race for the World Championship.