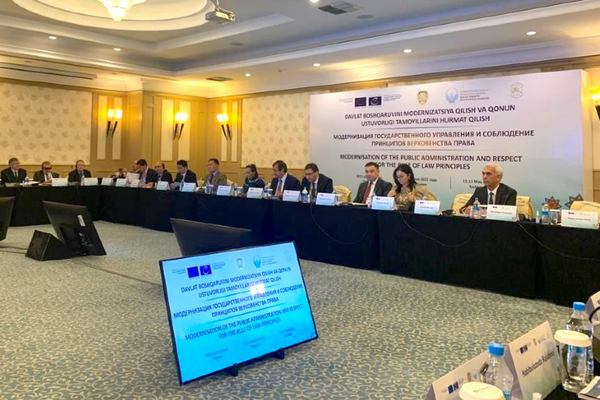 Tashkent, Uzbekistan (UzDaily.com) -- The Council of Europe and the European Union continue to promote efficient functioning of state institutions and public administration in Central Asia.

This was reiterated during a 2-day regional conference “Modernisation of the public administration in Central Asia and respect of the rule of law principles” which was organised by the Venice Commissionin in co-operation with the Ministry of Justice of the Republic of Uzbekistan in the framework of the joint EU/CoE Central Asia Rule of Law Programme on 12-13 May 2022 in Tashkent, Uzbekistan.

The conference aimed at initiating a regional dialogue between high-level civil servants of Central Asian countries on the constitutional and legal aspects of public administration reform processes, practical means for providing quality public services for citizens as well as professional development and performance management of civil servants.

The Minister of Justice of the Republic of Uzbekistan, Ruslanbek Davletov, underlined the importance of the Central Asia Rule of Law Programme as it provides a platform for exchanging experiences between countries of the region, for learning from each other and formulating concrete proposals aiming at enhancing performance of Uzbek state institutions. The Minister noted the relevance of the conference as it is happening in light of the changing global realities that inevitably affect the region. Bekik Berkimbaev, Deputy Chairman of the Agency of the Republic of Kazakhstan for Civil Service Affairs, also highlighted the effectiveness of regional approach that allows to exchange views and opinions on the legal process among the neighbours in the region. Gianni Buquicchio, President Emeritus, Special Representative of the Venice Commission, highlighted the importance of the Venice Commission’s initiatives in Central Asia aiming at strengthening democracy, the rule of law and human rights. The European Union Ambassador to the Republic of Uzbekistan, Charlotte Adriaen, outlined the uniqueness of this conference as it builds a bridge between the constitutional and the administrative law that both play a critical role in guaranteeing a more efficient functioning of state institutions in line with the European and international best practices. Ambassador-at-Large of Kyrgyz Republic, Tolon Turhunbaev, and Nigina Alizoda, First Deputy Minister of Justice of the Republic of Tajikistan, noted that the long-term dialogue with such a reliable partner as the Venice Commission allows the states to have a constant access to legal expertise and to benefit from technical support in the process of adaptation of international legal standards.

During the conference, high-level representatives of state institutions of Kazakhstan, Kyrgyzstan, Tajikistan and Uzbekistan shared the experiences of public administration reform in their countries and discussed the challenges they encounter in this process. The discussion was enriched by the contributions of the Venice Commission experts’ who shared relevant best practices from France, Germany, Georgia, Italy and Portugal. Touching upon rather general rule of law issues, the conference allowed to identify more concrete priorities for each participating country, which could serve as a basis for the preparation of targeted national actions with a view to modernising public administration and upholding the rule of law. In this regard, the representatives of the Central Asia Rule of Law Programme confirmed its readiness to provide further support to the national authorities of Central Asia based on their needs and priorities.