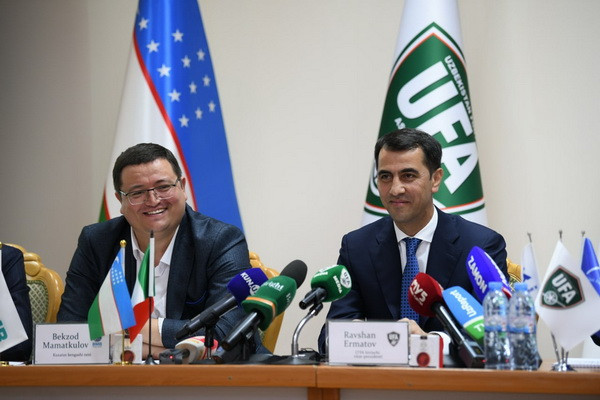 Tashkent, Uzbekistan (UzDaily.com) -- A press conference was held on 6 May, at UFA ahead of the match between the national teams of Italy and Uzbekistan on 17-18 May.

The press conference was organized by the Football Association of Uzbekistan and the Tashkent city administration and BMB Trade Group.

It is known that a number of events dedicated to the 110th anniversary of Uzbek football in 2022 are being organized in our country and internationally.

In addition, on 17-18 May, the Football Association of Uzbekistan, Tashkent city administration and BMB Trade Group will hold a match of national teams of Italian and Uzbek football legends.

Paolo Berlusconi also visited Uzbekistan under the leadership of the head of the Berlusconi Investment Fund. A delegation consisting of

At this event, dedicated to the 110th anniversary of Uzbek football, the legends of our football, who have long defended the honor of our country, will say goodbye to the national team.

The conference provided detailed information on the match between the stars of Uzbek and Italian football, the composition of the teams and the action plan.

At the end of the event, an open dialogue was held with about 15 media representatives of the country.