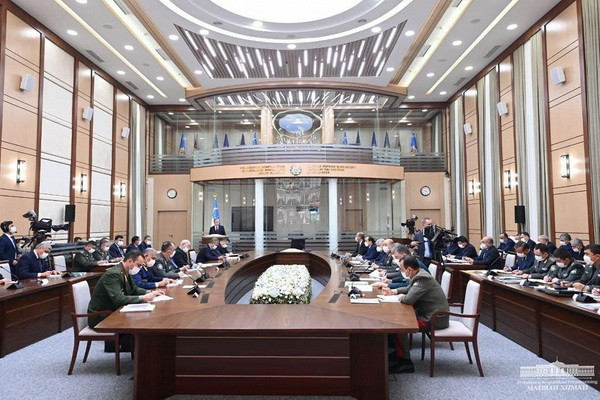 Tashkent, Uzbekistan (UzDaily.com) -- An expanded meeting of the Security Council chaired by the President of the Republic of Uzbekistan, Supreme Commander of the Armed Forces Shavkat Mirziyoyev was held on 13 January at the National Defense Control Center.

The event was attended by members of the Security Council, command staff of the Armed Forces, heads of the military administrative sectors, as well as representatives of state and public organizations.

It has become a good tradition to hold such meetings every year on the eve of the Day of Defenders of the Motherland. This year marks the 30th anniversary of the formation of the Armed Forces of Uzbekistan. At the beginning of the meeting, the head of our state congratulated all servicemen and veterans on the holiday.

During the meeting, the results of the activities of the Armed Forces and the military administrative sectors in 2021 were analyzed and priority tasks for the future were identified.

As a result of comprehensive measures taken in all areas of military construction, both the appearance of our national army and the level of readiness of the troops have changed over the past five years. Improved infrastructure in military units and training grounds, conditions for soldiers and officers. The fact that our military personnel took second place at the International Army Games 2021 is also the result of the development of the field.

This work is consistently continuing, the capabilities of combat units are expanding. A new system of protection of the state border is being introduced.

The head of state focused on the issues of personnel training and the introduction of advanced techniques. The need for advanced training of military teachers and the transformation of the Academy of the Armed Forces into a center of military science was pointed out. The task was set to effectively integrate the recently created Institute of Military Heritage and Modern Research into the system of military education and scientific activity.

Providing the Armed Forces with modern weapons and military equipment, modernizing the existing ones will also be one of the priorities in the field of military development.

It was instructed to adopt a conceptual program for the further development of the Armed Forces in 2022-2026 based on these goals and the nature of modern threats.

Instructions were given to bring the activities of the General Staff of the Armed Forces to a qualitatively new level, to strengthen the air defense system.

In the current situation of increasing threats in the global information space, the urgency of ensuring information security, protecting young people from alien ideas, psychological training of military personnel and strengthening morale is growing, the meeting emphasized.

It was noted that the commanding staff should improve the skills of planning modern operations, rational command and control of troops, and the effective use of available forces and means.

It is important to create a reserve of promising personnel for leadership and command positions, gradually prepare and appoint them to these positions on a competitive basis.

In modern conditions of increased dynamics and the emergence of new methods of warfare, success largely depends on the actions of small units led by sergeant commanders. In this regard, the task was set to radically improve the system of training instructor sergeants for the Armed Forces.

Tasks were set to positively address the population’s appeals, improve the social, engineering and communication infrastructure in the field, ensure abundance in the market and price stability.

- Ensuring the security, peace and tranquility of our people remains the top priority today and will remain so in the future. Because only peace and tranquility are the main guarantee of the comprehensive development of our country. The new year 2022 should be decisive in all areas, including in the Armed Forces, the President said.

Members of the Security Council, heads of the military-administrative sectors spoke at the meeting. Measures have been identified to further strengthen the country’s defense capability.