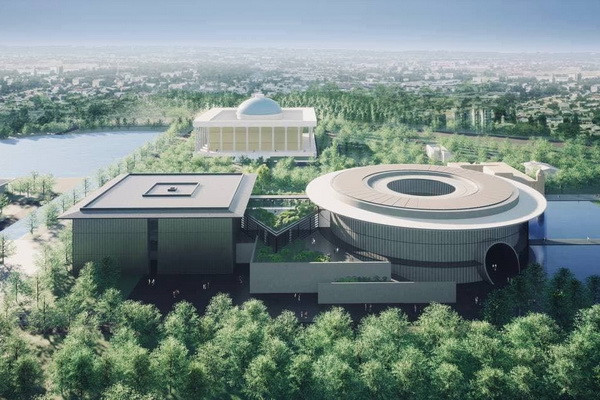 Tashkent, Uzbekistan (UzDaily.com) -- At the initiative of the President of the Republic of Uzbekistan Shavkat Mirziyoyev, large-scale work is being carried out in the country to preserve the richest historical and cultural heritage of the state.

In order to practically implement these initiatives of the Head of State, the Art and Culture Development Foundation under the Ministry of Culture of the Republic of Uzbekistan, in partnership with the Art, Science and Sport Charity Foundation, founded by the famous patron and philanthropist Alisher Usmanov, is implementing a number of projects to create cultural institutions in Uzbekistan.

In particular, the Art, Science and Sport Foundation supported the development of design concepts for the project of the new building of the State Museum of Arts of Uzbekistan, under the authorship of the world famous Japanese architect Tadao Ando, projects for the reconstruction of the former residence of Prince N.K. Romanov, the Center for Contemporary Art in Tashkent and the project for the preservation of the architecture of modernism in the capital "Modernism 20/21".

Construction of a new building for the State Museum of Arts of Uzbekistan.

In accordance with the decision of the government of the Republic of Uzbekistan, Art and Culture Development Foundation under the Ministry of Culture is implementing a project to build a new building for the State Museum of Arts of Uzbekistan.

The Pritkzer Prize laureate, maestro Tadao Ando developed the concept for the design of the museum building, which was based on the idea of creating a modern museum that embodies the highest international quality standards and security, preserving the historical heritage of the country and capable of becoming a new cultural symbol of New Uzbekistan.

Deputy Chairman of the Council of the Art and Culture Development Foundation Saida Mirziyoyev said:

“Our most important common task is to carefully preserve the historical and cultural heritage of our country and pass it on to the future generation.

Along with this, it is necessary to create, improve, and develop museums and other cultural objects.

In recent years, the Republic of Uzbekistan has implemented systemic measures aimed at the further development of national culture, the creation of a new history of New Uzbekistan, the preservation and promotion of treasures of material and intangible cultural heritage, further popularization of oral folk art and amateur art, ensuring the active integration of our country into the world cultural heritage. space, as well as innovative development of the sphere of culture and art”.

Reconstruction project of the former residence of Prince N.K. Romanov.

In pursuance of the resolution of the Cabinet of Ministers of the Republic of Uzbekistan, since 2019, the Foundation has been working on the restoration of the former residence of Prince Nikolai Konstantinovich Romanov and its further operation as a branch of the State Museum of Arts of Uzbekistan.

Currently, a preliminary reconstruction concept has been developed. It includes the architectural plan of the main building and its wings in accordance with their historical purpose, the plan for the exhibition of works of art, landscape design, as well as the restoration of the existing fountains.

The main focus of the project will be the creation of an exhibition space open to the public. Visitors can not only visit the museum, but also spend time in the park area of the palace.

“The activities of the Art, Science and Sport Foundation and the Art and Culture Development Foundation are focused on the preservation and enhancement of culture. Our cooperation will expand opportunities, enhance competencies and increase the number of projects implemented in Uzbekistan.

The restoration of the Palace of Prince Romanov is the first project in a series of major architectural projects in Uzbekistan, which will be supported by the Art, Science and Sport Foundation in the near future. It is symbolic that we are starting with the restoration of a building that personifies a vivid example of the long-standing historical ties between our countries. "

Reconstruction project of the Center for Contemporary Art in Tashkent.

The Center for Contemporary Art in Tashkent is a new space for the development and support of contemporary culture in Central Asia. In the implementation of this project, the Foundation cooperates with the architectural bureau Studio KO (France).

The building, which in the near future will become the new Center for Contemporary Art, was built in 1912. At the beginning of the 20th century, there was a diesel power station here, which generated electricity for the first tram line in the city. It was from here that the electrification of the city of Tashkent began. And from here the renewal of the artistic environment of modern Uzbekistan will begin.

According to the plan, after the reconstruction, the Center for Contemporary Art will contain the following: an exhibition space, a transformable auditorium, a cinema, a bookstore, a library, a space for master classes, a cafe-restaurant, an archive, an open public space, offices for staff, a storage.

Also, within the framework of the project for the reconstruction of the Center for Contemporary Art, in the makhallas of the historical district of the city of Tashkent, it is planned to open art residences for young artists and craftsmen.

"Modernism 20/21". Preservation, regeneration and adaptation of the architecture of modernism in Tashkent.

In collaboration with the architectural bureau Grace (Italy), the Foundation is developing a roadmap for the preservation of 20th century modernist objects in Tashkent.

The project aims to develop a methodology for assessing, restoring and including in the tourist map of Tashkent another important architectural layer of the city, formed in the 60s-80s of the last century. Tashkent has enough objects of architecture of this period, recognized as unique not only by local experts, but also by the international cultural community.

Having implemented the conceived project, the capital of Uzbekistan will be able to declare itself as the first “capital of modernism”. Having developed a modern methodology for preserving an important historical layer on the basis of applied research, the project will be able to breathe new life into the Tashkent architecture of the era of modernism and show its relevance and elegance.

The goal of the project is to make the selected objects look attractive and glossy, to improve them from a functional point of view, where residents of the capital will find in these buildings a new environment for cultural and social growth. Preserving and modernizing this architecture will make the city not only more diverse, comfortable and sustainable, but also more attractive to tourists.

Executive Director of the Art and Culture Development Foundation and Art under the Ministry of Culture of the Republic of Uzbekistan Gayane Umerova:

“Over the past five years, at the initiative of President Shavkat Mirziyoyev, consistent work has been carried out to preserve, study and popularize the country's historical and cultural heritage. In this regard, the country is carrying out a huge work on the revival and restoration of national values, the study of our rich history, the development of science and education, the preservation of our scientific and cultural heritage and its large-scale study and projects of the Foundation, as one of the state institutions in the field of culture and art, are a direct confirmation of this. "