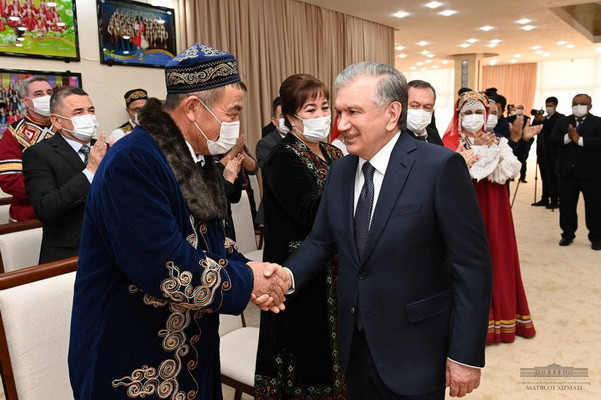 Tashkent, Uzbekistan (UzDaily.com) -- In the Palace of Culture “Farkhod” in the city of Navoi, the Head of the state met with representatives of the national cultural centers of the region.

“As is known, we pay special attention to strengthening unity and consent in our country. What has changed in your life as a result? What problems, what suggestions do you have? I came to talk to you about all this”, the President said.

The multinational Navoi region is a vivid example of friendship and mutual understanding between different peoples. Representatives of Uzbeks, Kazakhs, Karakalpaks, Tajiks, Russians, Koreans and many other nationalities live as one family and make a worthy contribution to the development of the country. There are 8 national cultural centers in the region, all conditions have been created for them. Education in schools is conducted in 7 languages.

Representatives of different ethno-cultural communities attending the meeting noted that broad conditions have been created for them to receive education, work, and preserve their culture. They informed about their achievements and the success of their children. It was emphasized that separate cultural centers were allocated, and July 30 was declared the Peoples Friendship Day in Uzbekistan.

“Today, at the meeting with voters, I suggested celebrating this bright holiday next year in Navoi region”, said Shavkat Mirziyoyev. – We also plan to build a Friendship Park in the city of Navoi in 2022 as a symbol of the unity of our multinational people.

The President noted that the policy aimed at strengthening the atmosphere of mutual respect and consent between all nationalities and ethnic groups living in our country, creating the necessary conditions for various religious confessions, will be consistently continued.

Thereupon, the Head of the state completed his visit to Navoi region and returned to Tashkent.