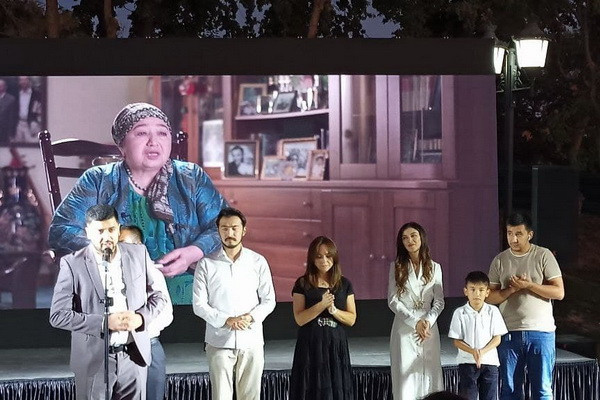 Tashkent, Uzbekistan (UzDaily.com) -- A documentary film about the life and work of the hero of Uzbekistan, People’s Poet of Uzbekistan Abdulla Aripov premiered at the Alley of Writers.

In order to ensure the implementation of the tasks set by the President of the Republic of Uzbekistan Shavkat Mirziyoyev during his visit to the Alley of Writers and in the Protocol of the meeting with filmmakers under No. 92, together with the Agency of Cinematography of the Republic of Uzbekistan and higher educational institutions, 24 films from the cycle "Khalq yuragi" were created.

Before the premiere, the Agency for Cinematography and the Tashkent Institute of Irrigation and Agricultural Mechanization Engineers organized a spiritual and educational event on the theme "Sheriyatga bakhshida umr." Poems dedicated to the life and work of the poet were recited at the event. For information, this year Abdulla Aripov would have turned 80 years old.

Then the documentary film "Abdulla Aripov" was shown, filmed by the studio "SPECTRE" by order of the Agency of Cinematography and the Tashkent Institute of Irrigation and Agricultural Mechanization Engineers.

The film was shot in the Tashkent and Kashkadarya regions, as well as in the city of Tashkent, in the pavilion of the Uzbekfilm film studio.

It should be noted that a documentary about Babur was shown the other day. In the near future, there will be premieres of documentaries about Ogakhi, Chulpan, Gafur Gulyam, Erkin Vakhidov and other famous writers.