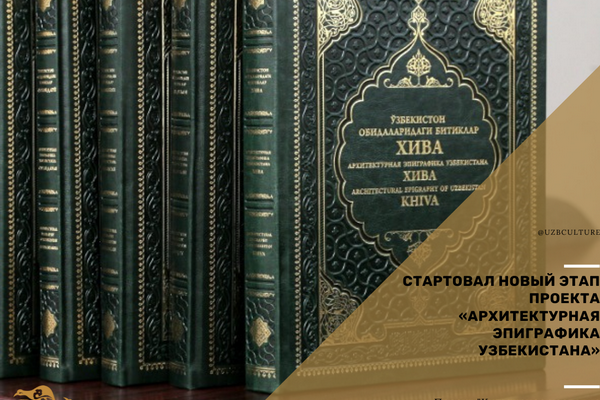 Tashkent, Uzbekistan (UzDaily.com) -- Since 2010, the World Society for the Study, Preservation and Popularization of Cultural Heritage has been working on the implementation of a large-scale project "Architectural Epigraphy of Uzbekistan", which has no analogues in the Islamic world. For the first time, work was carried out on a complete decoding of the epigraphy of historical monuments, and the publication of the data obtained in the format of illustrated book-albums.

The first stage of work ended with the publication of 13 multilingual volumes of this series in Uzbek, Russian, Arabic and English, dedicated to epigraphic inscriptions on architectural monuments of Karakalpakstan, Andijan, Bukhara, Kashkadarya, Navoi, Namangan, Surkhandarya, Ferghana, Khorezm, Tashkent regions and also photo albums dedicated to the architectural complexes of Samarkand - Registan and Shakhi-Zinda. All volumes were highly appreciated by the international scientific community. After a break, work on the project was resumed. Currently, work is underway on the preparation of two new volumes, in which the decoding of the inscriptions on the monuments of Khiva and Samarkand (Gur Emir) will be presented.

It is planned that a total of 25 books-albums will be published, dedicated to the architectural epigraphy of Uzbekistan. In the near future, it is also planned to reissue the previously published 13 book-albums. The new word of the Project is the preparation of a publication on decoding the inscriptions on the monuments of architecture of Baburids, India. Thus, the project crossed the borders of modern Uzbekistan. In the future, it will also cover the monuments of Afghanistan and Iran, created during the periods when we were tied by common state borders.

Two new books-albums of the series "Architectural Epigraphy of Uzbekistan", as well as 13 updated editions will be presented at the anniversary V Congress of the World Society for the Study, Preservation and Popularization of the Cultural Heritage of Uzbekistan in September 2021