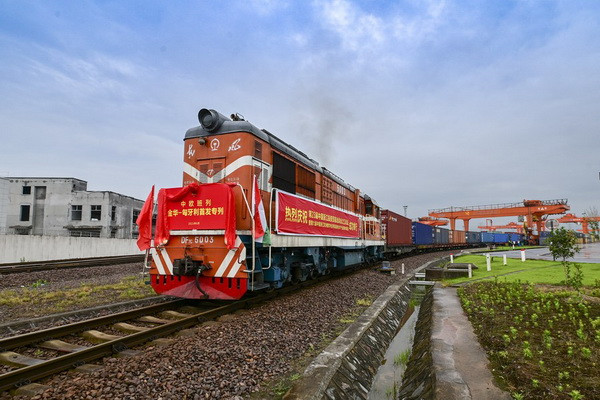 HANGZHOU, June 7 (Xinhua) -- A new China-Europe freight-train route linking the city of Jinhua in east China’s Zhejiang Province with Budapest in Hungary was launched on Monday.

The freight-train service was launched ahead of the 2nd China-CEEC Expo & International Consumer Goods Fair, which is to be held in the city of Ningbo, Zhejiang, from Tuesday to Friday.

The train carries about 21 million yuan (about 3.3 million U.S. dollars) worth of goods, including auto parts, electronic instruments and household items. It is expected to arrive in the Hungarian capital in 18 days.

The bilateral trade between China and Hungary grew 14.4 percent year on year in 2020, with China being Hungary’s third-largest trading partner, according to the Chinese Ministry of Commerce.

In the January-May period, a total of 286 China-Europe freight trains departed or arrived in the city of Jinhua, carrying 23,700 TEUs of goods, with the two figures up 565 percent and 566 percent year on year, respectively.

Foreign trade between Zhejiang and the Central and Eastern European Countries (CEECs) grew 33.2 percent year on year to 35.47 billion yuan in the first four months of this year, according to Hangzhou Customs.