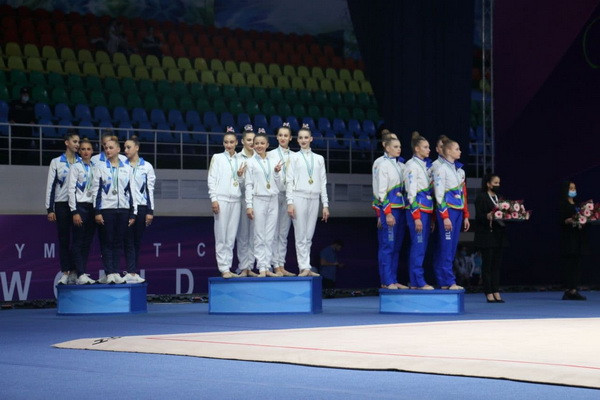 Triumph of the national team of Uzbekistan in rhythmic gymnastics

Triumph of the national team of Uzbekistan in rhythmic gymnastics

Tashkent, Uzbekistan (UzDaily.com) - For the first time in history, team of Uzbekistan took first place in the all-around stage of the World Cup. Nilufar Shomuradova, Dinara Ravshanbekova, Ksenia Aleksandrova, Sevara Safoeva, Kamola Irnazarova showed the highest result among the 8 participating countries in the exercise with 5 balls, receiving a score of 41.25 from the judges.

On the second day, the teams performed with three hoops and two pairs of clubs. In this type of program, our girls scored 35.15 bp. Of course, it was not without mistakes and losses, however, the high complexity of the exercises allowed the wards of the Russian coach Ekaterina Pirozhkova to bypass the strongest competitors with a total of 76.40 bp.

Israel took the second position and gymnasts from Belarus took third place. In the rating all-around of the individual program, awards with the dignity "gold" and "silver" went to the sisters Averin, Dina and Arina, respectively.

Thus, tomorrow Sabina will step on the platform three times and compete for medals in exercises with a hoop, ball and ribbon. Our other gymnast Ekaterina Fetisova, according to the results of the all-around, took 21 positions. In the final she will play with the ball.