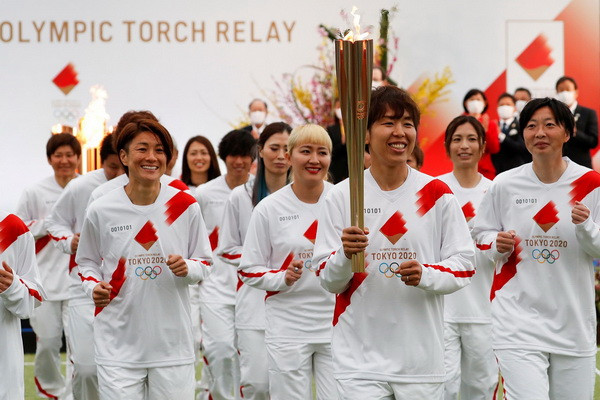 Tashkent, Uzbekistan (UzDaily.com) -- The Tokyo 2020 Olympic Torch Relay started in Fukushima, Japan. It will then travel through all of the country’s 47 prefectures over the next 121 days before arriving in Tokyo for the Olympic Games Opening Ceremony on 23 July.

The route, which is unchanged from a year ago when the Games were postponed, will see the Olympic flame travel through 859 municipalities, passing within a short distance of the majority of the Japanese population.

The flame’s journey began in the J-Village national football training facility in Naraha, Fukushima, one of several areas badly hit by the 2011 Great East Japan Earthquake. This particular location is befitting of Tokyo 2020’s Olympic Torch Relay concept - "Hope Lights Our Way", reflecting the Olympic flame’s symbolism of hope and peace, which is particularly relevant considering the challenges faced both within Japan and across the world in recent times.

The honour of being the first torchbearer goes to Nadeshiko Japan, the football team who won the 2011 FIFA Women's World Cup. Their victory played an important role in helping uplift the nation still reeling from the aftermath of the disaster that year.

Over 10,000 torchbearers, hand-selected from over half-a-million applicants, will have the responsibility of carrying the Olympic flame on its journey across Japan. Each torchbearer will celebrate the best in each of us - chosen for their ability to overcome adversity. They will be part of a unique Olympic Torch Relay, aimed at uniting people around messages of supporting, accepting and encouraging one another, illustrating how much stronger we are, together.

The torch design, with its pink gold colour, was inspired by cherry blossom, a flower synonymous with Japanese spring. It also embodies Tokyo 2020's commitment to sustainability. Approximately 30 per cent of the torch is made from recycled aluminium that was used for temporary housing after the 2011 earthquake and tsunami. Hydrogen, which emits no carbon dioxide when burned, will be used to fuel the torch for selected legs of the Relay. In addition, torchbearers will be outfitted with uniforms made from recycled plastic bottles collected by Olympic Worldwide Partner Coca-Cola.