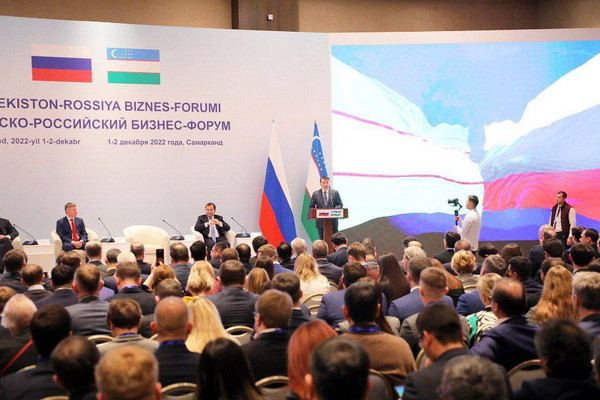 The Uzbek-Russian business forum began its work in Samarkand

The Uzbek-Russian business forum began its work in Samarkand

Tashkent, Uzbekistan (UzDaily.com) -- An Uzbek-Russian business forum began its work in Samarkand today, on 1 December, which was attended by heads of ministries and departments, regions, industry associations and unions, as well as over 500 representatives of leading companies and corporations of the Republic of Uzbekistan and the Russian Federation.

The speeches emphasized the positive dynamics of growth in trade between Uzbekistan and Russia. Over the past five years, trade between the countries has grown by 170%, and by the end of last year - by another third, exceeding US$7.5 billion.

The number of enterprises created in Uzbekistan with the participation of the Russian capital has tripled over the past five years. Today there are more than three thousand.

It was noted that it is the regions of the two countries that are catalysts for deepening bilateral partnership.

In order to further expand interregional cooperation, the heads of regional administrations of Russia are invited to visit Uzbekistan to work out new projects of industrial cooperation and trade agreements.

As part of the event program, there will also be meetings between representatives of the business community of the two countries, a series of panel sessions that will focus the attention of participants on priority areas of cooperation, and the Made in Uzbekistan exhibition.