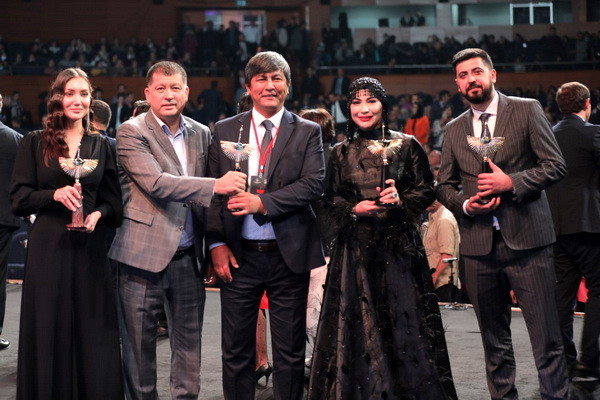 In addition, Uzbek actresses Yulduz Radjabova and Rano Shodieva were awarded the TURKSOY international award "for their contribution to the unity and community of the Turkish people." Since Shodiyeva is undergoing treatment, actress Raykhon Ulasenova accepted the award.

Within the framework of the film festival, students of the Tashkent VGIK Akmal Abidjanov and Saidalohon Masudkhonov were awarded with commemorative signs from the Minister of Culture and Tourism of Turkey Mehmet Nuri Ersoy "For shooting the most creative short film".

As the Minister of Tourism and Culture of the Republic of Turkey Mehmed Ersoy noted at the award ceremony, “Uzbekistan has pleased and surprised us with its powerful films presented at the film festival. They made a very strong and pleasant impression not only on the organizers, but also on the international jury. I sincerely congratulate the Uzbek filmmakers on such prestigious awards!” he said.

"These two Grand Prix at such a prestigious film festival are undoubtedly a bright result of the ongoing reforms in the field of cinematography and the great attention paid to the development of national cinema by our esteemed President. Of course, it is not easy to achieve victory in two main nominations among 57 films. After all, it is not we must forget that there were worthy competitors from 17 countries, among which Turkish cinema was represented, which is considered one of the best in the world... And this victory is the fruit of the enormous work of our filmmakers and young directors Furkat Usmanov and Dilmurod Masaidov, who were creatively formed precisely in New Uzbekistan," said Firdavs Abdukhalikov.

“The strongest impressions are joy, pride in the work done by our creative team! Young documentary filmmakers now have the opportunity to make themselves known not only to Uzbekistan, but to the whole world, and this is the merit of the competent policy of the head of New Uzbekistan. I want to express special gratitude to the Film Agency of Uzbekistan, without which this project, the film "Inson", would not have taken place.

"Uzbek cinematographers and Uzbek films participating in the Korkut Ata film festival give this event a special flavor. I cannot but emphasize that today in Uzbekistan much attention is paid to the field of cinematography. It is gratifying that the Tashkent International Film Festival, which has been suspended for many years, continues, and a new approach to film production is being applied in the country," said Timur Bekmambetov.

It should be noted that the second film festival of the Turkic world "Korkut Ata" this year was held from November 1 to 5 in Bursa. The festival was attended by representatives of the film industry from Azerbaijan, Uzbekistan, Kyrgyzstan, Kazakhstan, Turkmenistan.

Within the framework of the Korkut Ata film festival, the Days of Cinema of Uzbekistan were held. Creative meetings were organized with Uzbek movie stars, actors and directors, as well as screenings of films by Dilmurod Masaidov “The Fate of a Woman”, “101 Flights” by Akrom Shakhnazarov, “Spring of Love” by Ibragim Rasulov and Furkat Usmanov’s documentary “Inson”.