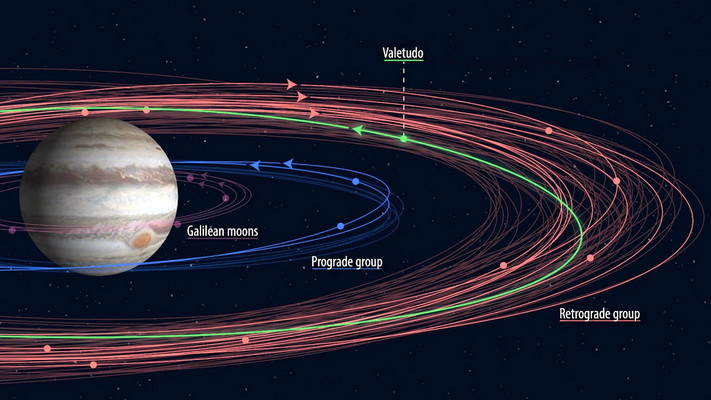 "I’m proud to say that this is the first planetary moon discovered by an amateur astronomer!" moon searcher Kai Ly said in a July 8 Sky and Telescope report that details the discovery.

Jupiter may have dozens or even hundreds of undiscovered moons orbiting around it. This massive planet boasts a substantial gravitational field that allows it to capture space debris into its orbit. Jupiter currently hosts at least 79 moons, and the number continues to grow. The latest discovery was made by Ly, an amateur astronomer, and it's the latest addition to the catalogue of the Carme group of Jovian satellites.

Carme and its crew are small, odd-shaped space rocks. They orbit in the opposite direction of Jupiter's rotation — a phenomenon called retrograde — and the group travels around Jupiter at an extreme tilt relative to the giant planet's orbital plane, according to NASA.

Carme is the largest of the group, with a mean radius of 14 miles (23 kilometers). Carme is the parent rock to the amateur astronomer's discovery and to the other 22 known members of the group. Astronomers think that Carme was an asteroid captured by Jupiter's gravity, and that its group are the bits that broke off of it following a cosmic collision.