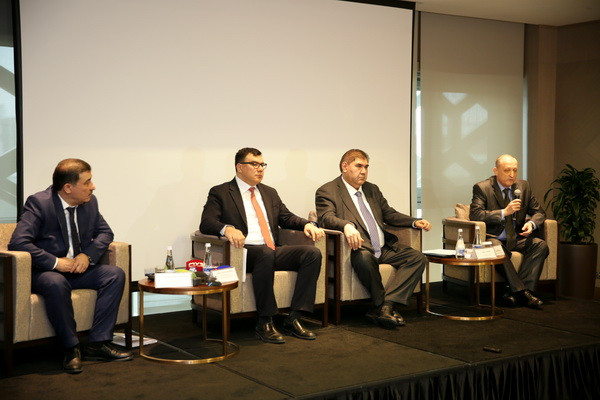 Aziz Abdukhakimov: Uzbekistan may become an international transit hub for air transportation in the region

Aziz Abdukhakimov: Uzbekistan may become an international transit hub for air transportation in the region

Tashkent, Uzbekistan (UzDaily.com) -- On 19-20 February, the International Aviation Forum “Uzbekistan Airports, Aviation & Logistics Forum” (UAALF-2020) is scheduled to be held at the Uzexpocenter National Exhibition Complex in Tashkent. The event was organized by the State Committee for Tourism Development of the Republic of Uzbekistan, the Ministry of Transport and the Fair Exhibition Organizers company.

More than 60 exhibitors, 300 delegates and 1200 specialists from many countries, such as the UK, Germany, France, Canada, India, Brazil, Turkey, Kuwait, Egypt, Russia, China and South Korea, in particular the heads of ministries of transport of foreign countries, representatives of the leadership of civil aviation and airports, leading international and foreign airlines, senior representatives of airports, aviation and transport companies, are expected to participate in the UAALF 2020 forum.

“The first international air forum is important in terms of attracting the world’s leading airlines to Uzbekistan,” said Aziz Abdukhakimov, Deputy Prime Minister and Chairman of the State Committee for Tourism Development. - The country has great transit potential. Uzbekistan is in an ideal position in terms of geography and climatic conditions. We have almost 365 days a year - flying weather. Our state may well become an international transit hub for air transportation, there are conditions for this.

“There are plans for the development of regional air transportation,” emphasized Minister of Transport Elyor Ganiev. - Not so long ago, a statement was made on the creation of a new company, Humo Air, which is just designed to organize transportation between the regions of the republic and in Central Asia as a whole. The Uzbekistan Helicopters company is being created, focused on the development of new types of services. There are plans to purchase international-style helicopters, specifically for promoting tourism, providing business services, including organizing excursions. The forum will also discuss issues of creating joint airlines, transferring airports to leading foreign organizations to manage airports.

During the forum, representatives of airports, aviation and logistics will present their products and services, as the government of Uzbekistan seeks to expand its logistics capabilities to meet the growing demand for flights.

It should be noted that President Shavkat Mirziyoyev at a meeting on tourism development on January 28 spoke about the quality of service in our airplanes and trains. Given the fact that the Ministry of Transport and the State Committee for Tourism Development were instructed to fully use the “open skies” mode introduced at 4 airports in Uzbekistan, as well as open new air routes, increase the number of high-speed trains and reduce the cost of tickets, we can say that UAALF-2020 meeting the requirements and goals of today.