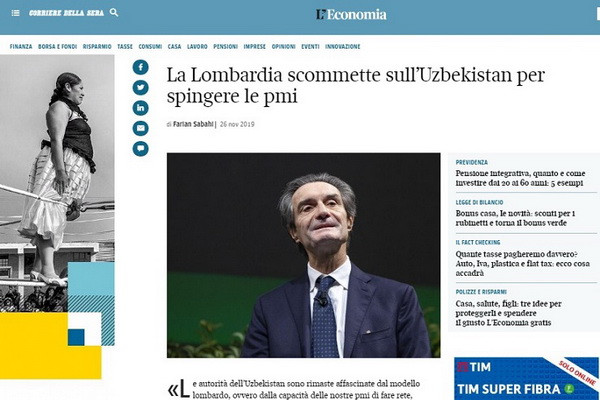 Tashkent, Uzbekistan (UzDaily.com) - A leading Italian newspaper, Corriere della Sera, has published articles on the prospects of economic partnership with Uzbekistan. In particular, the newspaper attracted the attention of its readers to the results of the recent visit of a delegation led by the Governor of the Italian region Lombardy Attilio Fontana to Uzbekistan.

According to the author of the articles, Farian Sabahi, Uzbekistan with its 32 million population and a growing number of consumers can become Italy’s gateway to the markets of Central Asian countries. It is especially noted that over the past three years, the country, under the leadership of President Shavkat Mirziyoyev, has become more open to the outside world, attracting foreign partners with wide opportunities for mutually beneficial cooperation.

The newspaper believes that Italian companies should actively enter the Uzbek market by demonstrating their technologies and know-how at various international exhibitions in order to establish joint production of a wide range of products.

With reference to the growing competition from companies and enterprises of other countries of Europe and Asia, the publication urges to act quickly to take its place in this important market.

The author of the article refers to the words of Governor A. Fontana that the delegation of Lombardy was impressed by the tax and other benefits for foreign investors in Uzbekistan, the network of free economic zones, as well as ambitious plans to create new infrastructures for foreign companies. It is also indicated that during the visit, business opportunities were discussed in the textile, pharmaceutical, agricultural and engineering sectors, as well as in the field of scientific research and innovation.

Along with this, it is noted that the model of economic development of Lombardy, recognized as one of the model in Europe and the world as a whole, has caused great interest in Uzbekistan. On this basis, there are good prerequisites for establishing cooperation between small and medium enterprises of the two countries, which will gain access to the latest innovative developments and international markets.

It should be noted that Corriere della Sera, also based on an interview with the Ambassador of Uzbekistan to Italy, Otabek Akbarov, published an article about the 12th Eurasian Economic Forum in Verona, with a special emphasis on the opportunities in Uzbekistan for Italian enterprises.

In particular, the article said that Uzbekistan offers many business opportunities, and not only in the oil and gas and infrastructure sectors. As the newspaper pointed out, “today, Uzbekistan is a rapidly expanding alternative market for Italian small and medium enterprises. Italians have a clear competitive advantage in the processing of agricultural products and the production of food products, especially dairy products, the textile sector, the production of building materials, leather goods and medicines. ”

At the same time, the publication cited a number of successful examples of cooperation, in particular in the metallurgical sector with Danieli, as well as with small enterprises, such as the Classimo furniture factory, which also transfer knowledge and practical skills in the process of establishing joint production. to Uzbek partners.

Corriere della Sera is the most widely read newspaper in Italy with a daily circulation of more than 300 thousand copies. The newspaper was established in March 1876 in Milan and is recognized as one of the oldest periodicals in Europe. It is one of the three most respected and quoted newspapers in Italy, along with La Repubblica (Rome) and La Stampa (Turin).