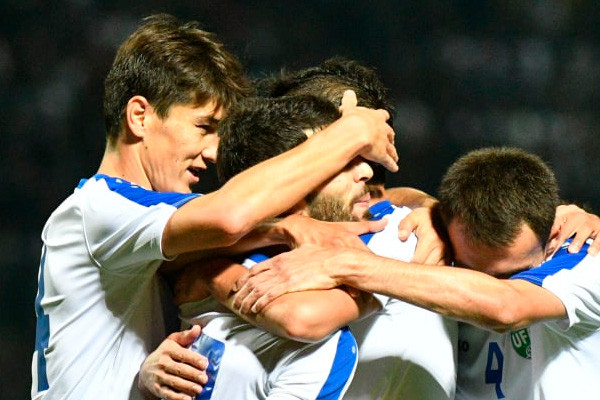 Tashkent, Uzbekistan (UzDaily.com) -- Uzbekistan breathed new life into their Asian Qualifiers Group D campaign on Thursday thanks to an impressive 5-0 win over Yemen in Tashkent.

Five different goalscorers and a consummate display throughout helped secure the much-needed victory for Uzbekistan, one which should go some way towards easing memories of the White Wolves’ surprise 2-0 loss to Palestine in their opening game en route to the FIFA World Cup Qatar 2022 and AFC Asian Cup China 2023.

By way of contrast – and in the wake of draws against both Singapore and Saudi Arabia – the defeat signalled a first loss in three for Yemen who had been forced to travel to Central Asia without suspended striker Mohsen Hasan.

As recently installed head coach Vadim Abramov watched on from the sidelines, Uzbekistan started brightly at the Pakhtakor Stadium and their early endeavours were duly rewarded when Sanjar Kodirkulov expertly converted Dostonbek Khamdamov’s pinpoint pass within the first two minutes.

Moments later, Jamshid Iskanderov forced visiting goalkeeper Salem Saeed into a fine save, before Ahmed Al Sarori registered Yemen’s first shot on target courtesy of a 20th minute effort which was expertly gathered at the near post by Eldorbek Suyunov in the Uzbekistan goal.

Despite seeing Yemen growing in confidence after their early setback, Uzbekistan continued to press and came close to extending their lead shortly before the half-hour mark, this time Khamdamov firing narrowly over the bar from the edge of the area.

One did, however, become two for the hosts on 32 minutes, FC Rostov forward Eldor Shomurodov rising highest to head Farrukh Sayfiev’s cross beyond Saeed’s despairing dive.

With half-time approaching, Saeed then reacted superbly well to palm away a deflected Shomurodov effort and keep his side in contention at the end of a fascinating first period.

Uzbekistan maintained their grip on the game after the break and they extended their lead on 53 minutes when Iskanderov’s long-range drive found the net after Yemen had failed to clear Jaloliddin Masharipov’s free-kick.

Roared on by the passionate Uzbekistan fans, Abramov’s charges continued to shine and, after Saeed had denied Khamdamov from close-range, Islom Tukhtakhujaev made it 4-0 by heading home a looping Masharipov corner.

Igor Sergeev rounded off the scoring in the 90th minute with an easy finish from three yards as Uzbekistan handed Abramov an ideal start to his second stint in charge of the national team.

Uzbekistan are back in action on Tuesday when they travel to play Singapore, while Yemen are now not scheduled to play again until they host Palestine on November 14.