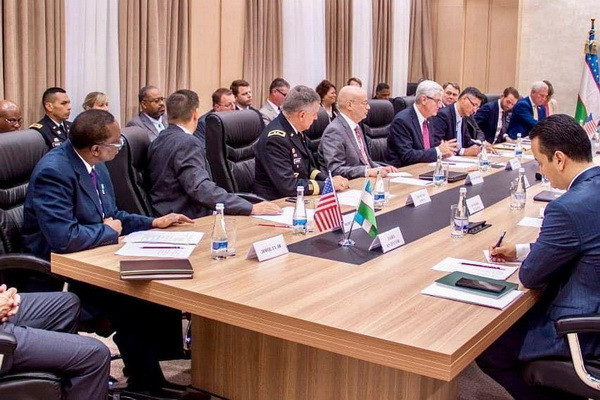 Uzbekistan, the US discuss development of bilateral ties

Uzbekistan, the US discuss development of bilateral ties

Tashkent, Uzbekistan (UzDaily.com) -- On 14 May, the Ministry of Investment and Foreign Trade hosted a meeting with a delegation of the State of Mississippi (USA) with the participation of State Governor Phil Bryant.

The delegation was received by the Deputy Prime Minister of Uzbekistan Elyor Ganiyev and Minister of Investment and Foreign Trade Sardor Umurzakov.

The US delegation also included representatives of official, business and academic circles and heads of companies in the field of trade and industry.

The head of the foreign delegation emphasized the special interest of the state government in establishing long-term mutually beneficial relations with an emphasis on business interaction. According to Phil Bryant, close bilateral cooperation in the field of agriculture, energy, textile industry, IT sector, transport infrastructure, bearing in mind the implementation of joint projects, the introduction of innovative technologies will allow to achieve synergies in activities to reach the markets of third countries.

Following the meeting, an agreement was reached on the creation of a joint working group on the implementation of the planned initiatives.

Also during the meeting on 16-17 May, members of the delegation will take part in the work of the first Uzbek-US-Canadian business forum in Navoi. The event is expected to attend about 100 representatives of companies from the United States and Canada.