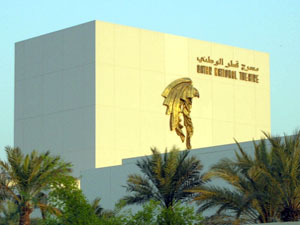 The Qatar Philharmonic Orchestra, under the umbrella of the Qatar Foundation, will perform for the first time at the Qatar National Theatre on 30 October, The Peninsula reported.

The opening concert will be under the patronage of Her Highness Sheikha Mozah bint Nasser Al Missned, Chairperson of Qatar Foundation and it will be conducted by world renowned conductor Maestro. Lorin Maazel.

The unique feature of the 101-strong orchestra is the Bekirova siblings - Alie and Lilya - twin sisters from Uzbekistan.

After a successful audition to get into the orchestra, the twins are looking forward to the opportunity to be part of world’s newest symphony orchestra. They are also excited about a new musical adventure and their move to Qatar.

The pair is identical and almost duet-like in their manner: finishing off each other’s sentences, saying the same things at the same time, laughing in harmony. The bond seems almost telepathic.

"We can feel each other, it’s the most important thing I think and it’s also very special, because when you feel what somebody’s feeling you can understand them without words, without discussing, without speaking," added Lilya.

The 25-year-old violinists have lived in Germany for the last eight years, but are enthusiastic about their move to the Gulf and their new home in Qatar.

"Now these countries are so famous, and we have heard many things about it but we had never been here," said Lilya. "I like it very much. I have a huge respect for this culture. I think it’s a good opportunity with this new orchestra because we are here from the beginning. The communication between people here is really very nice."

"It was an exotic thing for us to decide to come here. I cannot imagine how I could decide to do something that you know nothing about," said Alie. "It’s a different world for us but it’s a good experience. The people here are trying to build something cultural and it’s really, very important," said Lilya.

The Bekirova twins are unique in many ways, but they’re not the only twins playing violins for orchestras.

"There are two guys in America, two violinists, they are twins but they are working in different orchestras but they play very often together," said Alie. "It would be a great idea (for the four of us) to play together."

Alie and Lilya are delighted that they’ve been able to play together so much in their careers.

"And for the future, our future changes everyday, we never know what would be happening tomorrow but I like this possibility to be here together, to be on the start of building cultural life, and it’s nice, it’s really nice, something special to us. For the future two years we are here in Qatar," said Alie.