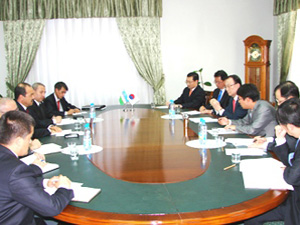 The Uzbek Agency for Communication and Information (UzACI) said on its website that the UzACI director-general Abdulla Aripov and the Korean delegation held negotiations on Friday, 17 October.

The agency said that during the meeting, the Korean delegation familiarized with the current affairs and perspectives of economic development of Uzbekistan and reforms in information technologies and telecommunication sector.

The sides discussed issues of further development of WiMAX network in Uzbekistan. Super iMax, venture with the participation of Korea Telecom (KT) and Sumitomo Corporation of Japan, launched mobile and fixed WiMAX network, investing US$10 million.

The parties said that introduction of WiMAX technology is actual as Uzbekistan has several remote areas.

The delegation also visited Tashkent University of Information Technologies on Saturday, 18 October. The delegation acquainted with the activity of the university.

Visiting the university, Mr. Choi expressed desire to deepen cooperation between Tashkent university and Korean institutions on training of specialists in such areas as WiBro and electronic government.