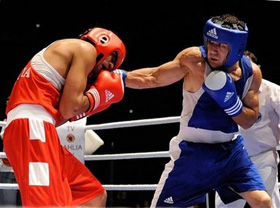 In his first bout, Uktamjon Rakhmanov fought with Anderson Rojas Mina from Ecuador and claimed a 16-10 victory.

The first two rounds ended with the same scoreline 5-4 for favour of Uzbek boxer. In the third round, Rakhmanov claimed a 6-2 victor and sent his opponent to knockdown twice.