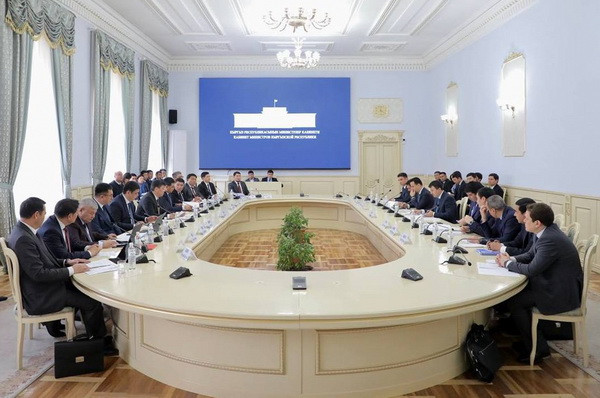 Uzbekistan and Kyrgyzstan: agreements reached on building up investment and industrial cooperation

Uzbekistan and Kyrgyzstan: agreements reached on building up investment and industrial cooperation

Tashkent, Uzbekistan (UzDaily.com) -- On 25 January this year, Minister of Investments, Industry and Trade Laziz Kudratov took part in expanded talks between government delegations of Uzbekistan and Kyrgyzstan, which were headed by Deputy Prime Minister of the Republic of Uzbekistan Jamshid Khodjaev and Deputy Chairman of the Cabinet of Ministers Kyrgyz Republic Bakyt Torobaev. The meeting was also attended by responsible heads of relevant ministries and departments, industry associations of the two countries.

The focus was on the current agenda of bilateral cooperation, as well as concrete steps to expand it. In this context, the high importance of the upcoming state visit of the President of the Republic of Uzbekistan Shavkat Mirziyoyev to the Republic of Kyrgyzstan, which is designed to give a powerful impetus to further deepening the partnership of our countries in all areas without exception, was noted.

On the margins of the high-level visit, it is planned to hold a business forum "Uzbekistan-Kyrgyzstan". At the meeting, the preparations for the event were discussed in detail. It is expected that over 200 leading representatives of the business circles of the two countries specializing in the chemical, textile, energy, automotive industries, information technology, agriculture, tourism and others will take part in it. The forum will include plenary and panel sessions, as well as B2B meetings and negotiations, as a result of which it is planned to sign more than 10 bilateral agreements and investment contracts.

Separately, during the negotiations, the activities of the Uzbek-Kyrgyz Development Fund, which has become an important tool for increasing industrial cooperation and creating interconnected value chains between Uzbek and Kyrgyz manufacturers through the use of the competitive advantages of the economies of the two countries, were considered.

The Uzbek-Kyrgyz Development Fund was established in April 2022 in order to strengthen economic cooperation between the Republic of Uzbekistan and the Kyrgyz Republic, modernize and develop the economies of the two countries, as well as effectively use the opportunities of bilateral cooperation by financing priority mutually beneficial investment projects.

The parties outlined specific joint steps to improve the efficiency of the Fund and accelerate the implementation of projects and programs planned within its framework.

Issues of development of industrial cooperation, prospects for the implementation of joint projects in the chemical and textile industries, mechanical engineering, pharmaceuticals, production of building materials and other areas were considered separately. The prospects for the development of transport and logistics cooperation are analyzed, bearing in mind the diversification of rail and road routes. An agreement was reached to increase cooperation in the fields of energy and agriculture.

In addition, the parties discussed the possibility of establishing cooperation in new areas, such as logistics, tourism, development of sports infrastructure, etc.

Following the talks, mutual commitment was expressed to continue close joint work on all discussed initiatives and projects.