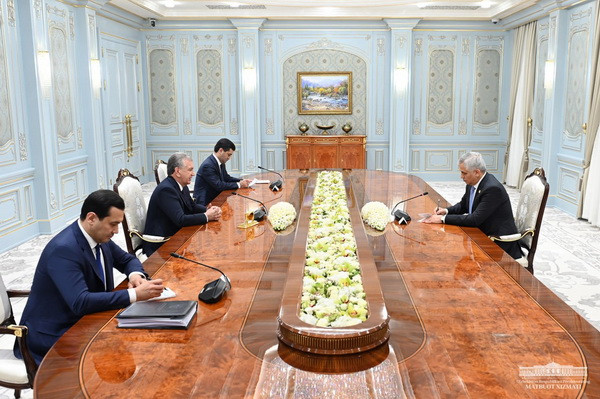 Tashkent, Uzbekistan (UzDaily.com) -- On 24 January, the President of the Republic of Uzbekistan Shavkat Mirziyoyev received the Secretary General of the Economic Cooperation Organization Khusrav Noziri.

The Secretary General congratulated the President of Uzbekistan on the successful chairmanship of the country in the Organization. It was emphasized that the important initiatives put forward and the events held in trade, economy, agriculture, energy, tourism and other areas gave a powerful impetus to the development of practical interaction within the framework of the ECO.

At the meeting, issues of further strengthening regional connectivity were discussed.

It was noted with satisfaction that in recent years, the trade turnover of Uzbekistan with the countries of the Organization has grown by 70 percent, and the number of joint ventures and projects has increased 5 times.

Comprehensive preparations are underway for the next summit of the Organization in November this year in the city of Tashkent.

The importance of the thorough preparation of the agenda for the upcoming event was emphasized.

Following the meeting, Secretary General Khusrav Noziri assured that the Secretariat is ready for close joint work to build up multifaceted cooperation within the framework of the ECO.