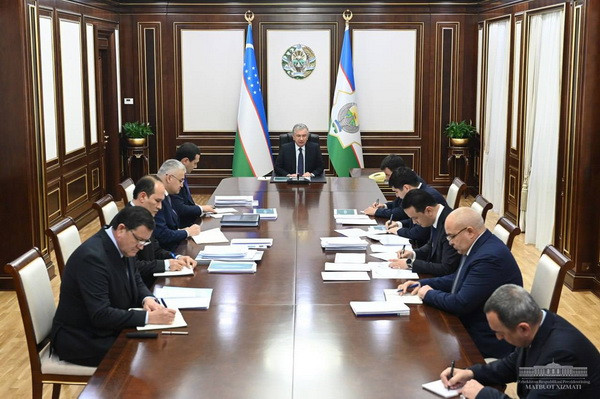 Actual issues in agriculture have been discussed

Actual issues in agriculture have been discussed

To date, cotton-textile clusters are invested in the industry of US$5.3 billion. About US$3 billion of preferential loans were directed to the sector. Clusters launched 265 projects worth US$4 billion and 300 thousand new jobs were created. As a result, the yield of cotton increased by 30 percent - from 26 to 34 centners per hectare.

At the same time, problems are observed in the field that makes it difficult to activity of clusters and farmers. Among them, the occurrence of debt and penalties from farms due to non -payment of value added tax on time.

7 thousand farmers are forced to irrigate cotton fields with pumps. The deadline for concluding futures contracts has not been established, there is no transparent system of registration of contracts.

The meeting discussed these and other problems in the field, determined the necessary measures to solve them.

In particular, it was noted that the practice of compensation will be introduced 50 percent of the costs of payment for electricity consumed for irrigation of cotton fields by pumps.

Responsible persons are instructed to streamline the contracts and resolve the mutual settlements between clusters and farmers, coordinate the cultivation of cotton and grain. It is determined that the penalties accrued to farms for non -payment of VAT at one time, in the order of exception, will be written off.

The task was set to establish registration of futures contracts in the electronic information system of the tax authorities and integrate it with the Agropoporean information system of the Ministry of Agriculture. From now on, the average monthly futures quotes of the New York Exchange will be published on the website of the Ministry of Agriculture.

At the meeting, the tasks of the current year are also affected by agriculture.

In particular, plans for the launch of 600 projects in the amount of US$400 million, the creation of an additional 185 thousand tons of warehouse and processing capacities, as well as agroservis centers in 33 districts were noted. The implementation of water -saving technologies for 300 thousand hectares and laser leveling of 200 thousand hectares is planned.

The serum industry produces products for more than 3 trillion soums and exports goods by almost US$110 million. However, the potential of the industry is not exhausted. In this regard, the Committee for the Development of Soldering and the Woolen Industry was instructed to ensure that this year is the workpiece of 26 thousand tons of cocoons, 1.3 million pieces of caracule leather and 40 thousand tons of wool.

The plans include the distribution of 100 thousand hectares of sowing lands and the provision of more than 2 million people due to this employment. The importance of these measures is emphasized for saturation with the main types of food products and ensuring the stability of prices in the markets.

Also, in our country, there is a great need for higher and middle specialists for the food industry. In this regard, a proposal is approved to create a new institution to train such personnel based on the experience of foreign countries.