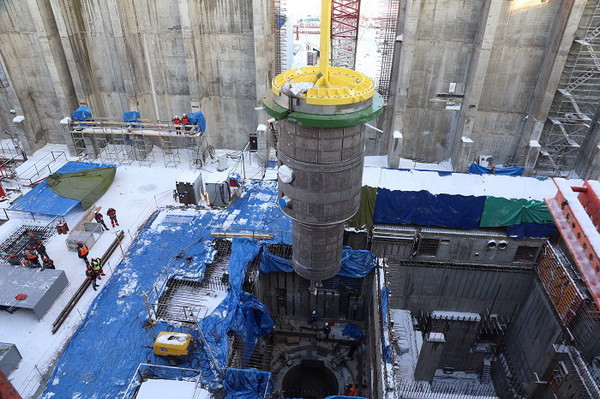 Tashkent, Uzbekistan (UzDaily.com) -- On 18 January, the vessel of the world’s largest multipurpose fast neutron research reactor (MBIR) was installed in its designed position at the Research Institute of Atomic Reactors (RIAR) construction site in the city of Dimitrovgrad in Russia’s Ulyanovsk region. RIAR is a part of ROSATOM’s scientific division “Science and Innovation, JSC”.

This is one of the key events in assembling the reactor plant and will make it possible to finish installing the dome of the reactor building.

“Installing the reactor vessel in its design position is a significant achievement of the work of a large team of like-minded scientists, engineers, designers, and builders. This is an important milestone in the MBIR reactor construction project, bringing us closer to installing reactor equipment and reaching the end of construction, which is already ahead of schedule. This means that we will get an advanced research infrastructure in a shorter amount of time, which will advance the study of two-component nuclear power engineering technology and our efforts to close the fuel cycle; it will help accelerate and justify the creation of safe fourth-generation nuclear power plants, and foster breakthrough research over the next 50 years. ROSATOM’s MBIR research rector and the Kurchatov Institute’s PIK reactor – Russia’s “megascience” project – are complementary, providing for the entire possible range of neutron research, both in terms of neutron energy and in terms of possible objects of research,” said Yuri Olenin, ROSATOM’s Deputy Director General for Science and Strategy.

The MBIR reactor vessel is a unique product with a length of 12 metres, a diameter of 4 metres, and a weight of more than 83 tonnes. It was delivered to the site in April 2022 – 16 months ahead of schedule. The equipment was manufactured at the Rosatom’s Atommash plant in the city of Volgodonsk in Russia’s Rostov Region.

The reactor’s construction at the RIAR site is a project of immense importance that makes it possible to both expand the scientific and production capabilities of Rosatom and the nuclear industry as a whole over the next fifty years, as well as make it possible to carry out socially significant projects in the city and the region, including the construction of a new low-rise residential building for highly qualified experts and scientists.

At the same time as the construction of the MBIR reactor, an international research centre (IRC MBIR) is being created in Dimitrovgrad. This global centre of expertise in fast reactors will bring together representatives of leading international and Russian scientific institutions.

Currently, about 1,400 workers (including engineering and technical personnel) and more than 80 units of construction machinery are engaged at the construction site.