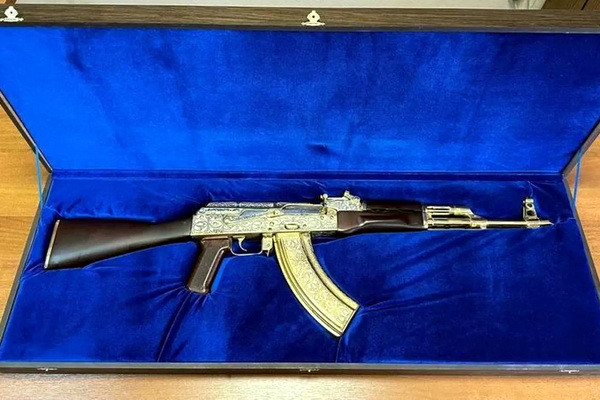 Tashkent, Uzbekistan (UzDaily.com) -- A gilded Kalashnikov assault rifle was found by customs officers at the Yekaterinburg airport on a passenger flying to Tashkent, the press service of the Ural Customs Administration reported.

“The gilded Kalashnikov assault rifle AK-74M of 7.62-mm caliber was found by Koltsovo customs officers from a Russian citizen flying to Tashkent. He tried to smuggle a gift case with a weapon through the “green” corridor,” the report says.

It is noted that the barrel with the receiver, the sighting device and the magazine of the machine gun, made in 1974, are covered with gilding with a pattern, and the stock and forearm are made of precious wood. The cost of similar products on the market reaches 500 thousand rubles, the customs stressed.

As the owner of the machine explained, the weapon decorated by the Zlatoust craftsmen is decommissioned, he was taking it as a gift to an old friend.

The department added that at present the product has been handed over to experts to establish the possibility of its transformation into a combat state.