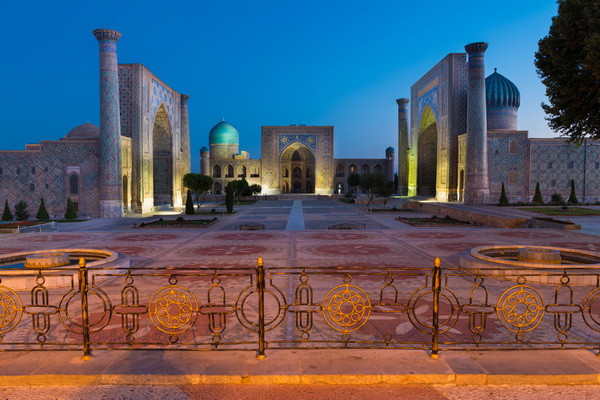 Tashkent, Uzbekistan (UzDaily.com) -- In 2022, the Registan ensemble in Samarkand region was visited by 1,27,951 local and foreign tourists.

It should be noted that the guest service in the complex was organized at a high level. In Registan, tourists have the opportunity to use the services of a guide or an audio guide.

In 2022, a number of works were carried out to further improve the activities of the Registan ensemble. In particular, unique historical objects found during the restoration and conservation work carried out during the year were presented at the exhibition "Historical Pictures of Samarkand", organized in the Tillakori Madrasah.

On 27 August 2022, the sculptures in the composition "Mentors and Students" from the exhibition "History in Pictures" in the Sherdor Madrasah were replaced with realistic wax sculptures.

In addition, the sundial, temporarily installed by the director of the Institute of Astronomy named after Mirzo Ulugbek of the Academy of Sciences of the Republic of Uzbekistan, academician Shukhrat Egamberdiev, was replaced with a steel one in January of this year and installed on a special marble column.

Samarkand, known as the “Tourist Gate of New Uzbekistan”, is the capital of the World Tourism Organization (UNWTO) in 2023. The 25th anniversary session of the UNWTO General Assembly will be held in Samarkand.