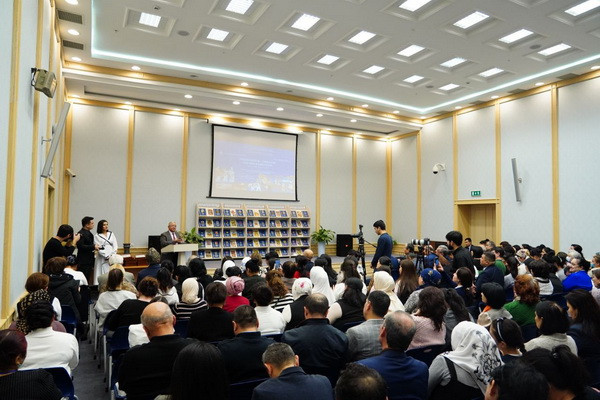 Tashkent, Uzbekistan (UzDaily.com) -- The World Society for the Study, Preservation and Popularization of the Cultural Heritage of Uzbekistan, together with the National Library of Uzbekistan named after Alisher Navoi, held a humanitarian action on the theme "A good book is the basis of quality education." The international publishing series "Cultural heritage of Uzbekistan in the collections of the world" was also presented.

At the event, which brought together more than 120 representatives of libraries, national cultural centers, museums and higher educational institutions, scientists and researchers, new volumes of the series "Cultural Heritage of Uzbekistan in the Collections of the World" were presented, as well as certificates for free receipt of books were presented.

– In his Address to the Oliy Majlis and the people of Uzbekistan on 20 December 2022, the President of the Republic of Uzbekistan Shavkat Mirziyoyev called the coming year 2023 “The Year of Caring for People and Quality Education”. “Improving the quality of education is the only correct way for the development of New Uzbekistan... The key to prosperity is in education, upbringing and knowledge. For all good goals are achieved through knowledge and education. Our joint action with the World Society to distribute book-albums of the multimedia project “Cultural heritage of Uzbekistan in the collections of the world” is dedicated to these goals. I will especially note the initiative to present books-albums not only to our organization, but also to all information centers in the regions and regions of the country. This is extremely important and valuable for readers, especially young people who live far from the capital,” said Umida Teshabaeva, director of the National Library of Uzbekistan named after Alisher Navoi.

For the past six years, the project has been sponsored by the domestic oilfield services company Eriell Group.

The organizers are sure that thanks to these books and the project, the young generation of our country will be able to study its history in depth, get acquainted with the collections that are stored abroad.

– The address of the President and the definition of 2023 as the “Year of care for people and quality education” is a significant stage in the development of the education system of our country. Today, the priority of state policy is youth, its upbringing and spiritual education, and this project is a vivid proof of this. Let us remember: after all, we, too, were once young students, graduate students, and were looking for similar books both in the country and abroad. Our country has its own magnificent publications that tell about the unique artifacts of our land, stored in foreign collections. At the same time, it must be emphasized that to this day there are no analogues of such a project in the world. Thanks to the efforts of New Uzbekistan, a system of centralized study of the heritage of the peoples of our country has emerged, which must certainly be continued,” said Shukhrat Sirojiddinov, Doctor of Philology, Rector of the Tashkent State University of the Uzbek Language and Literature named after Alisher Navoi.

It is important to note that the books represent not only the heritage stored in foreign museums around the world, but also national collections, some of which are published for the first time.

- We are very proud that the Bukhara State Museum-Reserve has completed the preparation of the 54th volume of the series "Cultural Heritage of Uzbekistan in the Collections of the World", which is dedicated to the collection of our museum. The release of the volume will be timed to coincide with the celebration of the 100th anniversary of the museum, - shared a researcher at the Bukhara State Museum-Reserve Sherali Juraev. - The team of the Bukhara Museum-Reserve believes that in the future the project should continue its work in an expanded format and hold such events more often, especially in the regions of the country.

Guland Subkhanova, Chairman of the Republican Tajik National Cultural Center of Uzbekistan, shared her impressions: “Today we received the first 10 volumes, which describe a myriad of cultural objects of the peoples of Uzbekistan! The organizers said that they are currently working with the museums and libraries of Tajikistan to create new volumes, which means that soon the international scientific community and we will see new books dedicated to the heritage of our fraternal countries! Emotions are running high, it’s very nice!

Leading researcher at the Institute of Oriental Studies of the Academy of Sciences of the Republic of Uzbekistan Umarbek Sultanov noted the importance of improving the quality of education in higher educational institutions and made a suggestion: “I believe that these books should first of all be distributed in higher educational institutions of our country. I ask the World Society to create lighter editions of these books in the pocket book format, which will be easy to use and accessible to students, primarily specialized areas. I am sure that the youth will thank us!”.

“More than 400 scientists and experts, including eminent scientists around the world who have become members of the World Society, with the support of state and public organizations, the media sphere and other interested structures, are studying the heritage of Uzbekistan around the world,” said Firdavs Abdukhalikov, Chairman of the Board of the World Society. - This initiative of the scientific community is a vivid example of the consolidation of public, state and international organizations, as well as socially responsible business, aimed at implementing the initiatives of New Uzbekistan. The outgoing year for the World Society was marked by the VI International Congress in Samarkand with the participation of 250 foreign scientists, the publication of 50 volumes, the presentation of new 10 volumes and plans to create another 10 albums in the coming 2023. We were able to present a number of deluxe publications, including “Ceramics of Rishtan”, “Begzad, Shaming Mani” and the four-volume “Masterpieces of Uzbekistan”, as well as a facsimile edition of “The Book of Fixed Stars”, created by decree of the outstanding astronomer Ulugbek. The experience of the project, in which hundreds of scientists, both foreign and domestic, are involved, constantly convinces us that its active promotion has become possible thanks to the openness policy of our country. On behalf of the members of the World Society, we deeply thank the President of Uzbekistan, the government of our country and all those who have supported the project for the past six years, the author and project manager emphasized.

Within the framework of the project, in cooperation with national and foreign scientific institutions, with the support of socially responsible business, 50 volumes of book-albums of the series “Cultural heritage of Uzbekistan in the collections of the world” were published in Uzbek, Russian and English. These books contain valuable information about the masterpieces of the cultural heritage of Uzbekistan and are dedicated to the collections of more than 30 countries of the world. Along with this, more than 30 documentaries about these collections have already been shot. Ten more volumes are being prepared for publication.

The World Society includes about 400 orientalists, art critics, historians and ethnographers from more than 40 countries of the world. During 2017-2022 6 international congresses, more than a hundred presentations, round tables and media events were held.