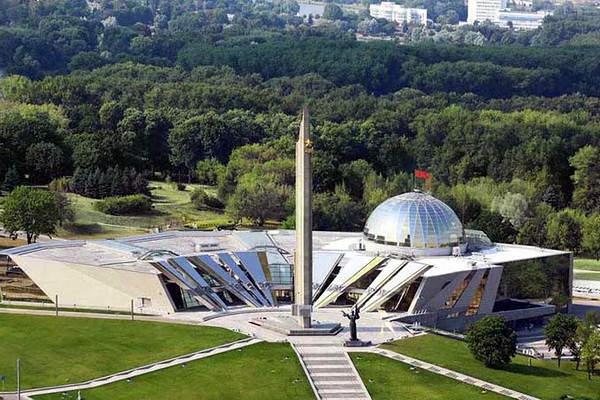 Tashkent, Uzbekistan (UzDaily.com) -- On 29 November 2022, the Belarusian State Museum of the History of the Great Patriotic War opened the exhibition "The memory of the people is sacred", dedicated to the contribution of the Uzbek people to the victory over fascism during the Second World War.

The exposition is organized by the Embassy of Uzbekistan in Belarus jointly with the SCO Public Diplomacy Center in Uzbekistan and the Belarusian State Museum of the History of the Great Patriotic War and is dedicated to the 30th anniversary of the establishment of diplomatic relations between Uzbekistan and Belarus, which will be celebrated next year. This was reported by the press service of the CIS Executive Committee.

Representatives of the creative intelligentsia, diplomatic departments accredited in Belarus, as well as a delegation of the CIS Executive Committee headed by Deputy Chief of Staff of the Chairman Viktor Guminsky took part in the opening of the exhibition.

The exposition presents archival photographs telling about Uzbek soldiers and home front workers - all those who contributed to the common Victory.

Opening the exhibition, Chargé d’Affaires of Uzbekistan in Belarus Rakhmatulla Nazarov noted that in the hard times of war, Uzbekistan has become a reliable rear that provides for the needs of the front.

“Thanks to the selfless work of our multinational people, almost 300 enterprises of the republic began to produce military products. Uzbekistan produced and supplied to the front a huge amount of military equipment and ammunition, clothing, food, medicine and other vital products. More than one and a half hundred factories were evacuated from the front-line territories to Uzbekistan and put into operation in a short time. Thousands of wounded soldiers were treated in hospitals organized in our country,” said Rakhmatulla Nazarov.

Director of the SCO Public Diplomacy Center in Uzbekistan Kabuljon Sabirov spoke about perpetuating the memory of the Uzbek people and their contribution to the victory over fascism during the opening ceremony of the exhibition. He reminded the audience that the Uzbek warriors had traveled a heroic path from Moscow to Berlin.

“You know very well that there were no battles in Uzbekistan, no shells were exploding there, but there was also a war there. There was a struggle - a struggle for the life of their homeland. Of the 6 million inhabitants of the country, almost 2 million were drafted into the army and sent to the front.

At the same time, Uzbekistan has become home to one and a half million inhabitants of the occupied territories, of which 250,000 are children who have lost their homes, relatives and friends. And not a single child ended up in an orphanage, they all found shelter in Uzbek families,” said Kabuljon Sabirov.

At the opening of the exhibition, the need to preserve the memory of the terrible tragedy of the Great Patriotic War and the need to prevent the glorification of Nazism was especially emphasized. Viktor Guminsky, Deputy Chief of Staff of the Chairman of the CIS Executive Committee, spoke about this in his speech.

“We know perfectly well who won this war - the Soviet people. And let no one doubt it. And we will always protect this Victory. Back in 2012, the Commonwealth of Independent States signed the Agreement on perpetuating the memory of the courage and heroism of the peoples of the CIS member states in the Great Patriotic War of 1941-1945. And last year, a decision was made to establish an International Association (Commission) of Historians and Archivists of the Commonwealth Member States. The main task of this structure is to counteract attempts to distort history and falsify the results of the war, to preserve the historical truth,” Viktor Guminsky emphasized.

By decision of the Uzbek side, the exhibits of the exhibition were donated to the Belarusian State Museum of the History of the Great Patriotic War. Soon the exposition will be presented in the Belarusian regional centers.