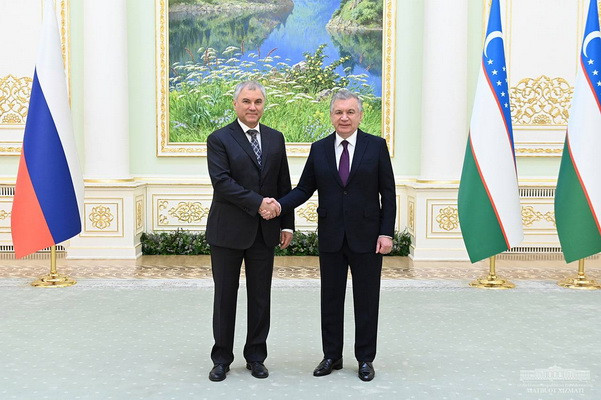 Tashkent, Uzbekistan (UzDaily.com) -- On 28 November, President of the Republic of Uzbekistan Shavkat Mirziyoyev received a Russian parliamentary delegation headed by Chairman of the State Duma of the Federal Assembly of the Russian Federation Vyacheslav Volodin.

At the beginning of the meeting, Viacheslav Volodin conveyed the greetings and best wishes of the President of the Russian Federation Vladimir Putin to the head of Uzbekistan.

Issues of further deepening the relations of a comprehensive strategic partnership and alliance between Uzbekistan and Russia, development of cooperation in the political, trade, economic, cultural and humanitarian spheres were discussed.

The high dynamics of inter-parliamentary contacts in recent years, the introduction of the practice of holding meetings of a new format in the regions of Uzbekistan and Russia - at the level of the leadership of the chambers and committees of the parliaments of the two countries, were especially noted.

It was emphasized that the activities of the newly created Inter-Parliamentary Commission on Cooperation will serve to further strengthen bilateral cooperation and expand the exchange of experience in the field of organizing legislative work.

The positive results of economic cooperation were noted with satisfaction. Bilateral trade has grown by a third since the beginning of this year.

With the attraction of Russian investments in Uzbekistan, joint projects are being successfully implemented in the oil and gas, energy, mining and metallurgical, and agricultural industries. Business ties between the regions of the two countries are steadily expanding.

Fruitful interaction is developing in the cultural and humanitarian sphere, primarily in the field of education and science, as well as the tourism industry.

Members of the Russian delegation highly appreciated the changes achieved during the years of reforms in Uzbekistan in the areas of socio-economic development, work to educate young people, increase the potential of healthcare, and modernize urban and rural infrastructure.