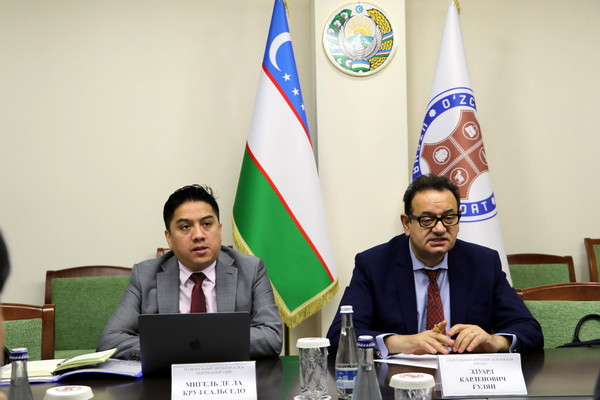 Tashkent, Uzbekistan (UzDaily.com) -- The Uzcharmsanoat Association held a meeting with the leadership of the European company ACIR Southern Europe. The topic of the dialogue is the opening of a representative office of Uzbekistan in Southern Europe, including Milan, Madrid and Lisbon.

It should be noted that this is not the first meeting with the leadership of this European company, a lot of work has already been done to represent Uzbekistan in the European continent. This is the main mission of ACIR Southern Europe. This international business platform is designed to establish contacts and interaction between business associations and industry associations of the countries of Central Asia and Southern Europe. In addition, it is a "single window" for entry, promotion and completion of projects in these countries.

“You have your own “home” in Southern Europe,” said Eduard Ghulyan, head of ACIR Southern Europe, speaking about the opportunities provided by the company. Acting as the official representative of Uzbekistan, ACIR opens European markets for our country.

At the meeting, ACIR representatives also invited the Uzcharmsanoat Association and its member enterprises to take part in the IMEX-Impulso Exterior Exhibition of the Export Potential of Central Asia, which will be held on 6-10 February 2023 in Madrid. Speaking about this expo, the organizers noted that the event will be the largest of its kind in Southern Europe and will reveal the potential of intersectoral cooperation between the countries of Central Asia.

This meeting opens up new opportunities for enterprises in the leather and footwear industry to work effectively within the framework of the GSP + prevention system and expand exports to European countries.