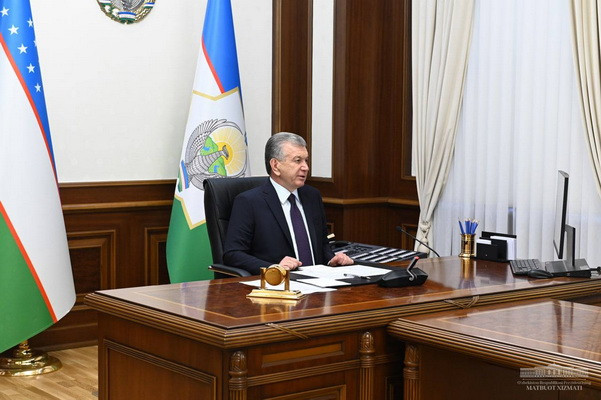 Tashkent, Uzbekistan (UzDaily.com) -- President of Uzbekistan Shavkat Mirziyoyev got acquainted with the presentation of additional measures aimed at the development of space activities.

As you know, according to the decree of the head of our state from 30 August 2019, the Uzbekcosmos Agency was established under the Cabinet of Ministers. Over the past period, a number of measures have been taken to form the regulatory framework and create the necessary infrastructure in this area. But the pace of the work being done does not correspond to the scale and trends in the development of the world space economy.

For example, in 2020, the total market for space services in the world approached $400 billion. A large share in it is occupied by remote sensing of the Earth, satellite communications, and navigation services. In the future, the need for space services will only grow.

With this in mind, on behalf of the President, a five-year concept and a roadmap for the development of the space industry were developed. It defines goals for remote sensing of the Earth, the creation of a national constellation of telecommunications satellites, the creation of a research and production center, training, support for aerospace startups.

Also, it is planned to assign additional tasks to the Uzbekcosmos Agency. This, for example, is the identification of violations in the spheres of the economy by analyzing satellite images, the implementation of state space monitoring, and the preparation of proposals for the use of advanced technologies.

The head of our state asked about the final effect of the proposed measures.

It was noted that the development of the industry will help a wide range of areas, including agriculture and water management, land relations, ecology, geology. Thus, the level of accuracy in the analysis of types and areas of crops, unauthorized occupation of land, unauthorized organization of landfills will reach 95 percent. The protection of hydraulic structures, subsoil and minerals will also be strengthened.

The President approved these proposals and instructed to adopt the relevant documents.