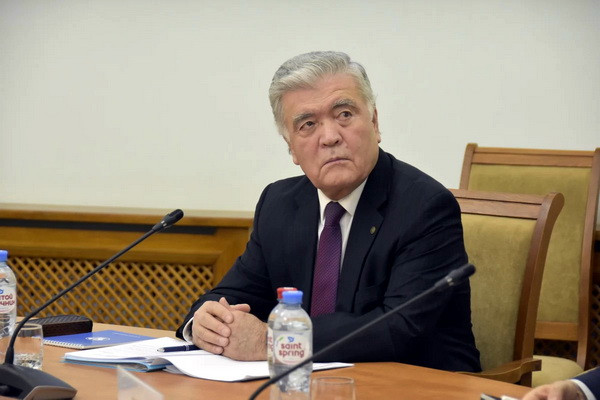 At the beginning of the meeting, the Chairman of the CIS Executive Committee, Sergei Lebedev, informed the audience in detail about the work of the Observer Mission from the Commonwealth of Independent States in the early elections of the President of the Republic of Kazakhstan.

Then the Council of Permanent Representatives began to consider the issues on the agenda of the meeting. Alexander Klobuk, member of the Interstate Council, Head of the Department for Supervision of Safe Work in Industry of the Ministry of Emergency Situations of the Republic of Belarus, reported on the activities of the Interstate Council on Industrial Safety in 2017–2021.

He said that interaction in this area in the CIS began in 2001, when the Agreement on Cooperation in the Field of Ensuring Industrial Safety at Hazardous Production Facilities was signed. The agreement was signed by Azerbaijan, Armenia, Belarus, Kazakhstan, Kyrgyzstan, Moldova, Russia, Tajikistan and Ukraine. Uzbekistan joined the Agreement two years ago.

In accordance with the agreement, the Interstate Council for Industrial Safety was established. The main purpose of its work is to ensure coordinated actions and measures taken in the field of industrial safety.

According to the speaker, the work of the Council makes it possible to use the results of joint research work, information and methodological materials, and practical experience in ensuring industrial safety. Mutually beneficial exchange contributes to the improvement of the industrial safety system of the member states of the Agreement.

The activities of the Council contributed to the development and deepening of cooperation between national regulatory authorities in the field of industrial safety of the CIS member states, which made it possible, on the basis of the exchange of best practices, regulatory documents and methods, to lay the foundation for subsequent steps to harmonize the legislation of the partner countries and ensure coordinated actions in this area.

Alexander Klobuk emphasized the openness of the Interstate Council on Industrial Safety for cooperation and joint exchange of experience with state bodies regulating industrial safety issues in countries outside the CIS region. As an example, he cited interaction with the United Nations Economic Commission for Europe, in particular with the Secretariat of the Convention on the Transboundary Effects of Industrial Accidents. The Secretariat has been granted observer status in the Council and its representatives participate annually in Council meetings.

The speaker said that with the organizational support of the Council, the International Industrial Safety Forum is held annually in St. Petersburg, which is an excellent platform for discussing practical issues of cooperation and exchanging experience in the field of industrial safety.

“The interaction of the CIS member states in the field of industrial safety contributes to a constructive exchange of experience, the development of an interested dialogue, and the strengthening of mutually beneficial cooperation,” summed up Alexander Klobuk.

The permanent representatives of the CIS countries assessed the role of the Interstate Council and suggested that, in cooperation with other bodies of sectoral cooperation of the CIS, continue work on the implementation of tasks aimed at improving the industrial safety of the Commonwealth member states, holding joint events to strengthen mutually beneficial cooperation between the member countries of the Council, and search for new modern methods and arrangements for the sharing of preventive measures and rescue capabilities.

Plenipotentiary representatives of the Commonwealth member states summed up the results of the meeting of the CIS Council of Heads of Government held in Astana on 28 October. As a result of the work, the Council of Heads of Governments adopted more than 20 documents on various areas of cooperation within the Commonwealth. Among them are the Concept of scientific, technical and technological cooperation, the Concept of digital transformation of the branches of the chemical complex of the CIS member states, the Regulations on the Operator of the Interstate Program for Innovative Cooperation for the period up to 2030, the Action Plan for holding the Year of the Russian Language in the Commonwealth of Independent States in 2023 as language of interethnic communication, Agreement on cooperation in the prevention and response to emergencies in the field of public health of a sanitary and epidemiological nature.

The permanent representatives also decided on the date of the next meeting of the Council of Permanent Plenipotentiary Representatives of the Commonwealth Member States to the statutory and other bodies of the CIS. It is expected to take place on 20 December 2022.

At the end of the meeting, the participants of the event got acquainted with the exhibition of a series of publications “Cultural heritage of Uzbekistan in the collections of the world”, donated by the Uzbek side to the CIS Executive Committee.