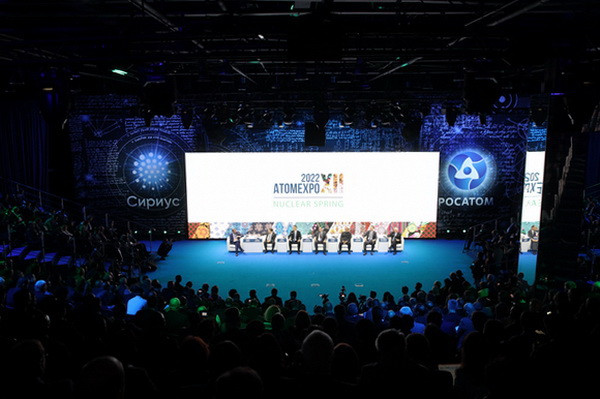 At the plenary session of ATOMEXPO-2022, the situation in the nuclear industry and the prospects for its development on a global scale were discussed

At the plenary session of ATOMEXPO-2022, the situation in the nuclear industry and the prospects for its development on a global scale were discussed

Tashkent, Uzbekistan (UzDaily.com) -- The 12th Atomexpo International Forum, which opened on 21 November 2022 in Sochi, is being held this year under the motto "Atomic Spring: Creating a Sustainable Future".

This is not accidental: as you know, spring symbolizes the rebirth and renewal of life, hopes for the future are associated with spring. Now a serious energy crisis is unfolding in the world, associated with a multiple increase in prices for fossil energy carriers, supply instability, and the destruction of logistics and technological chains. Under these conditions, nuclear energy can not only solve the current problems faced by the economies of most countries of the world, but also become a development driver for decades to come.

This was discussed at the plenary session held within the framework of the forum, which was attended by Alexei Likhachev, Director General of Rosatom State Corporation, Peter Szijjarto, Minister of Foreign Economic Relations and Foreign Affairs of Hungary, Ney Zanella dos Santos, Director General of the Brazilian ENBPar Corporation, and Viktor Karankevich, Minister of Energy of the Republic of Belarus , Deputy Minister of Energy and Natural Resources of the Republic of Turkey Alparslan Bayraktar and Minister of Science and Technology of the People's Republic of Bangladesh Yafesh Osman.

Alexei Likhachev spoke about the projects of the State Corporation for the development of nuclear generation in the country and the role of Russia in diversifying the energy basket of other countries. He stressed that until today, Rosatom "has not severed any commercial and scientific ties with foreign partners."

In the 15 years since its inception, Rosatom has built 11 power units within the country and abroad. Now the corporation is building 23 blocks abroad in eight countries, and there are already relevant intergovernmental agreements on 34 blocks.

As Aleksey Likhachev noted, the main point of growth in the next 20-30 years will be the newcomer countries of the "nuclear club" who want to bet on low-carbon sources. These are Bangladesh, Uzbekistan, Kazakhstan, Kyrgyzstan, Turkey, Egypt, Saudi Arabia. These are the countries of Africa that have concluded the first agreements with Rosatom and are already considering the outlines of future projects.

Minister of Foreign Economic Relations and Foreign Affairs of Hungary Peter Szijjarto said that the country is building a pragmatic and well-thought-out energy strategy that allows not only to develop industry and control pricing in the energy sector, but also reduce the negative impact on the environment.

Ney Zanella dos Santos, Director General of ENBPar, noted that Brazil is a country where there is a lot of sun and wind: in Brazil, about 90% of the energy balance comes from hydroelectric power plants. In addition, there are favorable conditions for the development of alternative energy sources. "But nuclear energy is another resource that will allow us to expand our horizons," said Ney Zanella dos Santos.

He spoke about the prospects for the widespread use of low-power modular nuclear reactors in remote areas of Brazil, and the construction of another nuclear power plant in the north of the country, similar to the Angra plant. Its first and second power units have already been put into operation, the third is planned to be commissioned in 2027. Overall, Brazil intends to add 10 GW of nuclear capacity over the next 30 years.

Minister of Energy of the Republic of Belarus Viktor Karankevich said in his speech that "our country already has a modern nuclear power plant that works for the benefit of the people, and has generated 9.6 billion kWh since commissioning." The second unit of the Belarusian NPP is to be launched soon, which, according to Viktor Karankevich, will make a significant contribution to the environmental situation by reducing CO2 emissions. “Further cooperation with Rosatom will expand in such areas as scientific and technical support for the operation of nuclear power plants, handling of spent nuclear fuel, and training of personnel for nuclear energy,” Viktor Karankevich said.

The participants of the plenary session agreed that the “nuclear renaissance” is becoming an obvious reality. The facts testify to this. So, in October of this year, the German federal cabinet approved by law the proposal of Chancellor Olaf Scholz to extend the operation of the last three reactors until mid-April 2023. In Japan, where the development of nuclear energy stopped after Fukushima, it is again going to restart its nuclear energy system, and they are thinking about building nuclear power units. South Korea refuses the decision of the country's past leadership to close the nuclear power plant. France and Great Britain intend to increase the share of nuclear generation in their energy balance: by 22 and 24 GW, respectively. The United States is extending the life of its nuclear power plants.

At the end of the event, the head of Rosatom announced a forecast on the directions in which the global nuclear energy will develop. “In the next 10-15 years, along with the replication of generation 3+ power units, small nuclear generation will be developed. Then, until the mid-2050s, the issue of transition to a two-component nuclear power industry will be resolved - the simultaneous operation of thermal and fast reactors with a closed nuclear fuel cycle. If we talk about the long term, 50 years or more, then we rely on thermonuclear fusion technologies. I am sure that humanity will receive a unique source of energy, a “man-made sun”, which will contribute to sustainable economic development and improve the quality of life for millions of people,” said Alexei Likhachev.