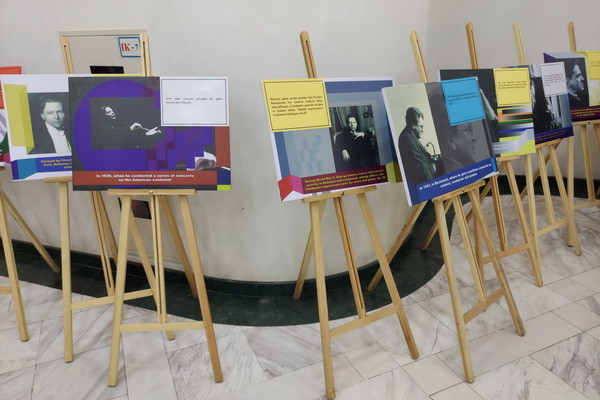 The exhibition was visited today by the Ambassador Extraordinary and Plenipotentiary of Romania to the Republic of Uzbekistan HDaniel Cristian Ciobanu.

George Enescu is considered the most important Romanian musician. His creative personality manifested itself in various roles: composer, violinist, teacher, pianist and conductor. George Enescu embodied the soul of the Romanian people in his works.

The exhibition presents photographs that illustrate important moments in the life and work of the great musician. Documentaries are shown on the big screen of the National Library, in which the magic music of the composer George Enescu sounds.

The exhibition is organized by the Embassy of Romania in Uzbekistan with the support of the National Library of Uzbekistan named after Alisher Navoi, in partnership with the National Museum. George Enescu in Bucharest.

The Ambassador of Romania expressed warm congratulations on the opening of the exhibition and stressed that this event is a symbol of friendship between Romania and the Republic of Uzbekistan. He noted the importance of holding the XI National Information and Library Week "INFOLIB UZBEKISTAN-2022".

Romania pays special attention to expanding cooperation with the Republic of Uzbekistan in all areas. Bilateral relations in the field of culture continue to strengthen and successfully develop. In January of this year, the Embassy of Romania in Tashkent and the National Library of Uzbekistan named after Alisher Navoi organized the exhibition "Romania’s Contribution to the World Heritage".

In February 2022, the Tashkent House of Photography and the Embassy of Romania in Uzbekistan held a photo exhibition together about the work of the great sculptor Constantin Brâncuși. In March of this year, the Embassy of Romania presented the national traditions of the holiday of welcoming spring "Martisor" at the British School in Tashkent. Also in March of this year, the French Alliance in Tashkent hosted a screening of a wonderful documentary film "Wild Romania", which reveals the beauty of the nature of Romania.

In June 2022, the Museum of Applied Arts of the Republic of Uzbekistan and the Embassy of Romania organized an exhibition of national Romanian costumes dedicated to the Day of the Romanian blouse.

On 6 September 2022, the ceremony of handing over Romanian books was held at the National Library of Uzbekistan named after Alisher Navoi.

On 15-16 September 2022, the Days of Romanian Cinema were held as part of the XIV Tashkent International Film Festival "Pearl of the Silk Road".

The exhibition will be open for visitors at the Alisher Navoi National Library until 4 November 2022.