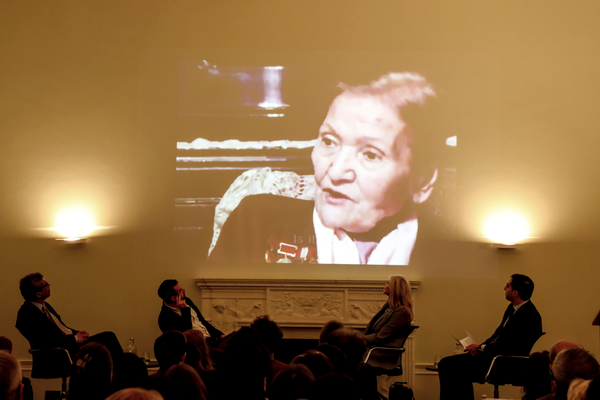 Tashkent, Uzbekistan (UzDaily.com) -- A pathbreaking photography exhibition has opened in London that tells the story of Sara Eshonturaeva, an icon of the dramatic arts in Uzbekistan and traces her connections to the Jadid intellectual movement. Over 150 people attended the opening reception on Tuesday.

The exhibition, titled Bound for Life and Education: Sara Eshonturaeva and the Jadid Movement in Soviet Uzbekistan, includes over 70 historic photographs and documents that have never before been displayed outside of Uzbekistan.

Born in the village of Beshbulok in the Fergana Valley in 1911, Sara Eshonturaeva was Uzbekistan’s first professional actress. Her training began in Moscow in 1925 at the Bukharan House of Knowledge (Buxoro Bilim Yurti), a newly established state institute founded by Fayzullah Khodjaev, head of the Bukharan People’s Soviet Republic.

Khodjaev was a prominent member of the Jadids, a group of intellectuals who believed in the essential compatibility between Islam and modernity and sought to harness art and science to solve social ills. As part of these efforts, the dramatic arts offered a powerful means to edify the public and help shape a new national identity—Eshonturaeva was an emblem of this power.

But Eshonturaeva’s connection to the Jadids was severed beginning in the late 1920s, when prominent Jadids became the subject of persecution by Soviet authorities.

For Eshonturaeva, career advancement was a method of self-preservation. She married prominent actor Abror Khidoyatov and the two emerged as stars in theatre and film and were decorated for their services to arts and culture in the Soviet Union. Eshonturaeva played iconic roles including 400 performances as Desdemona in William Shakespeare’s Othello.

The title of the exhibition is taken from Desdemona’s opening lines in that play and allude to how Eshonturaeva was bound to the Jadids through both her education and shared experiences, which were joyful and tragic.

“The Jadids were modernist reformers who sought to create new forms of culture and education for their society. After the Russian revolution they had fraught relationship the Soviet regime. After early cooperation, the Soviets eliminated the Jadids from public life and erased their memory. This exhibition brings to light long hidden photographs that open a fascinating window into this complex history and allows us to see the Jadids as historical agents as never before,” said Adeeb Khalid, a historian at Carleton College and a leading expert on the legacy of the Jadids.

“Bringing together these photographs in the intimate space of Asia House gallery is an attempt to reclaim a sense of Jadid continuity following this moment of rupture,” said Niloufar Edmonds, the exhibition curator.

“As a woman and Soviet Uzbek national figure propelled into the spotlight from the late 1920s onwards, Eshonturaeva was forced to diminish her intellectual origins and her precious line of connection to the Jadids—or so it seemed to the outside world. To reclaim her own reality following this forced erasure, she kept nearly every photograph and document that gave testimony to her career,” added Edmonds.

The photographs and documents on display are primarily drawn from a family collection carefully preserved by entrepreneur Nadira Khidoyatova, granddaughter of Sara Eshonturaeva, and daughter of noted historian Goga Khidoyatov.

Khidoyatova believes that the exhibition “is special because it offers a chance for the Western understanding of Uzbekistan to catch-up to how the Uzbek people are now reconsidering what it means to be part of an independent, modern country.”

“The exhibition tells the story of figures that the Uzbek people have held close in their hearts, even if they were not in the history books,” she added.

The sentiment is shared by Ambassador Said Rustamov, who gave a welcoming address at the exhibition opening. “The progressive ideas of the Jadids about national revival and self-determination and their efforts to create a society based on universal humanistic values has become an important source of inspiration for today’s modern Uzbekistan. For this reason, there is tremendous value in deepening our understanding of figures like Eshonturaeva. We hope that British academics and researchers will contribute to the study of this transformative period in the history of Uzbekistan,” said Ambassador Rustamov.

Khidoyatova exhibited part of her extensive family collection at the NBU Fine Arts Gallery in Tashkent in April of this year. This is where Esfandyar Batmanghelidj, CEO of the Bourse & Bazaar Foundation, which sponsored the exhibition, first learned about Eshonturaeva’s story.

“The historic and cultural significance of the collection was immediately obvious to me, and I came to see the story of Eshonturaeva and her connection to the Jadids as a powerful way to think about what makes Uzbekistan such a dynamic country today. I am proud that we could stage an expanded exhibition in London,” said Batmanghelidj.

The Bourse & Bazaar Foundation hopes to work with other institutions to build on the success of the London exhibition.

“As part of the exhibition, we have also produced a remarkable, museum-quality catalogue. Our plan is to make a small contribution to the growing scholarship on the Jadids by translating this catalogue into Uzbek,” Batmanghelidj explained.

Bound for Life and Education will be on display at Asia House in London’s Fitrovia neighbourhood through 30 October.